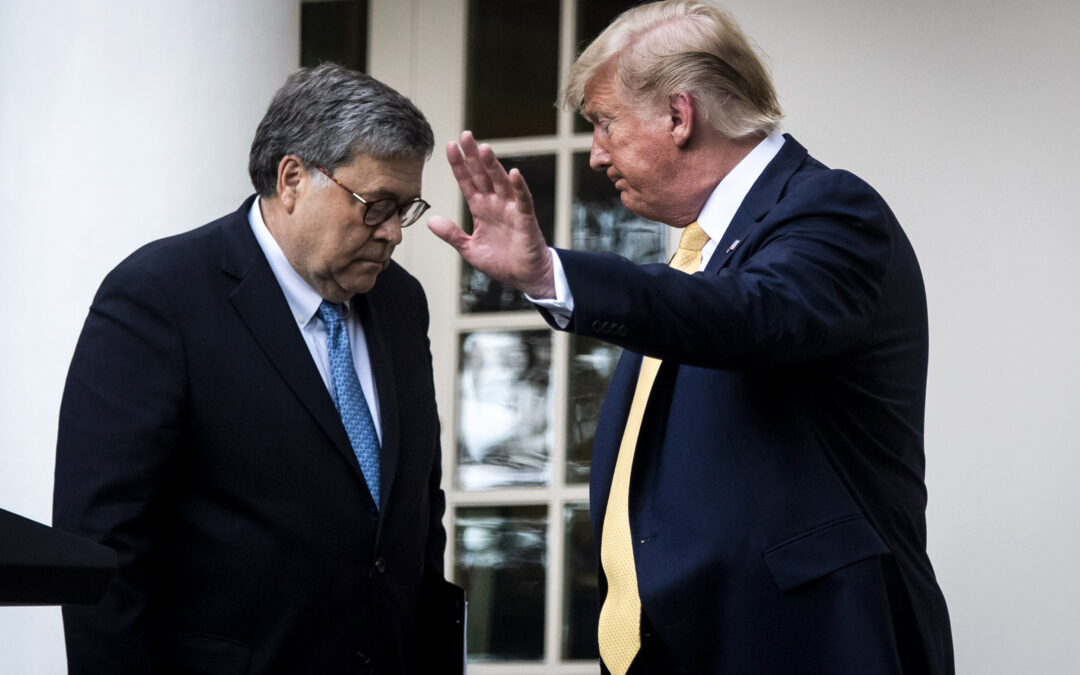 Attorney General Bill Barr said today that President Trump should stop tweeting about the Justice Department because his tweets “make it impossible for me to do my job.”

Barr’s comments are a rare break with a president who the attorney general has aligned himself with and fiercely defended.

But it also puts Barr in line with many of Trump’s supporters on Capitol Hill who say they support the president but wish he’d cut back on his tweets.

When asked if he was prepared for the consequences of criticizing the president – his boss – Barr said “of course” because his job is to run the Justice Department and make decisions on “what I think is the right thing to do.”

“I’m not going to be bullied or influenced by anybody … whether it’s Congress, a newspaper editorial board, or the president,” Barr said. “I’m gonna do what I think is right. And you know … I cannot do my job here at the department with a constant background commentary that undercuts me.”

Barr ignited a firestorm this week after top Justice Department officials intervened in the sentencing of Roger Stone, a longtime friend and former campaign adviser to the president who was convicted of lying to Congress, witness tampering and obstruction of justice.

In a stunning reversal, the Justice Department overruled a recommendation by its own prosecution team that Stone spend seven to nine years in jail and told a judge that such a punishment – which was in line with sentencing guidelines – “would not be appropriate.”

In the interview with ABC News, Barr fiercely defended his actions and said it had nothing to do with the president.

He said he was supportive of Stone’s convictions but thought the sentencing recommendation of seven to nine years was excessive.

When news outlets reported the seven to nine year sentencing recommendation last Monday, Barr said he thought it was “spin.”

Barr said he told his staff that night that the Justice Department has to amend its recommendation.

Hours later, the president tweeted that it was “horrible and very unfair” and that “the real crimes were on the other side.”

The blowback from such an unprecedented move by the Justice Department leadership was immediate, both internally among the rank-and-file and in Congress.

The entire four-man DOJ prosecution team withdrew from the case, and one prosecutor resigned from the Justice Department entirely.

Sen. Lindsey Graham, chair of the Judiciary Committee that oversees the Justice Department and one of Trump’s closest allies on Capitol Hill, said the president should not have tweeted about an ongoing case.

The Justice Department, while led by a president appointee and Cabinet member, is tasked with enforcing the law and defending the interests of the U.S. without political influence.

He insists he had already discussed with staff that the sentencing recommendation was too long.

“Do you go forward with what you think is the right decision or do you pull back because of the tweet? And that just sort of illustrates how disruptive these tweets can be,” he said.

When asked directly if he had a problem with the president’s tweets, Barr responded, “Yes. Well, I have a problem with some of, some of the tweets. As I said at my confirmation hearing, I think the essential role of the attorney general is to keep law enforcement, the criminal process sacrosanct to make sure there is no political interference in it. And I have done that and I will continue to do that,” adding, “And I’m happy to say that, in fact the president has never asked me to do anything in a criminal case.”

Barr also said he was “a little surprised” that the prosecution team withdrew from the case and said he hadn’t spoken to the team.

Trump has been pleased with Barr’s actions on Stone, praising him on Twitter.

Trump on Wednesday said he was “not concerned about anything” about the resignations at the Justice Department and suggested the prosecutors “should go back to school and learn.”

“Congratulations to Attorney General Bill Barr for taking charge of a case that was totally out of control and perhaps should not have even been brought,” Trump tweeted this week, after all prosecutors assigned to the case quit.

Barr told ABC that he would object if ever asked to use his power at the Justice Department to achieve political means.

When asked if he expects the president to react to his criticism of the tweets, Barr said: “I hope he will react.”

“And respect it?” ABC’s Thomas asked.