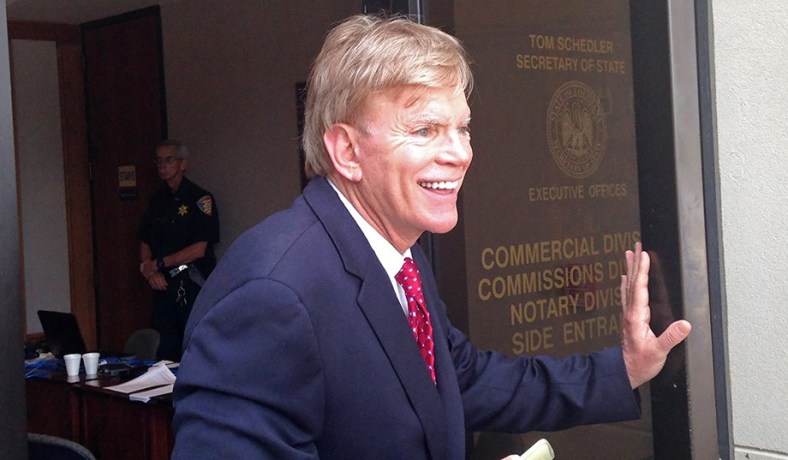 The resolution made no mention of Romney’s vote to convict Trump in the Senate trial that concluded last week.

The censure of Romney, the 2012 Republican presidential nominee, was a lot easier for Louisiana Republicans than one against David Duke thirty years ago.

In 1989, after Duke had won a surprise upset in a special election for a state legislative seat, conservative Republican Beth Rickey tracked Duke to what amounted to a national neo-Nazi meeting and then caught him selling Nazi-related tracts from his state legislative office.

As national news media covered the 1989 meeting, most of the Republicans balked.

They offered a variety of reasons.

Many thought censure would be a slap in the face to the voters who elected him.

“The Republican Party of Louisiana couldn’t rouse itself even to condemn, much less censure, former Klan leader Duke for pushing neo-Nazism from his state legislative office, but it now censures its own recent presidential standard-bearer right after he voted his conscience,” said Quin Hillyer, former GOP congressional candidate from Louisiana. “What a lack of perspective that shows. What an embarrassment.”

Meanwhile, some Republican party members in Utah are now calling for the censure of Romney.

A draft resolution calling on Romney to support the president’s agenda or vacate his seat will be considered at the Republican Party state central committee meeting on February 29.

I have officially submitted a resolution for the Utah GOP State Central Committee to formally censure Senator @MittRomney for his vote to remove @realDonaldTrump. #Trump2020 #ImpeachmentTrialSham #DonaldTrump #AcquittedForever pic.twitter.com/aFel6muxWn

The motion, if approved by the Utah Republican Party, includes a statement expressing “severe disapproval” for Romney’s impeachment vote.

“A lot of us feel that it’s sort of an embarrassment to our party,” Beckham said, according to the Salt Lake Tribune.

Beckham notes that the Utah GOP passed a previous resolution to express full support of the president, and to call on all Republicans to defend him.

Romney met with party leaders but would not comment to reporters about what they said. He did recognize that he would be facing criticism over his vote.

“No question the consequence will be enormous,” Romney said. “The consequence of violating my conscience and my oath of office to God would be even greater.”

Utah Gov. Gary Herbert, also a Republican, said he did not support a censure vote against Romney.

“I think that would be just a mistake to go down that road,” said Herbert.