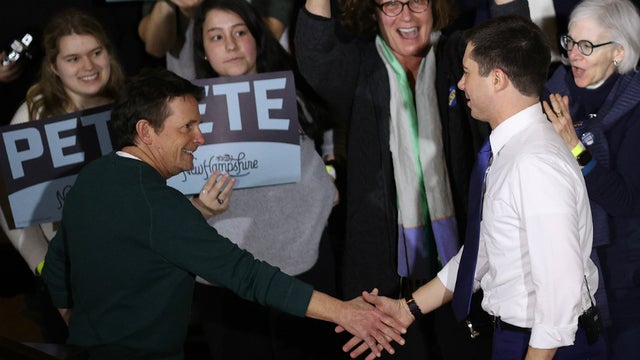 “We have a very stable Rhodes scholar,” Fox, who is backing Buttigieg, told a large crowd rallying for the Democratic presidential hopeful at Keene State College in New Hampshire. “That’s better than a very stable genius.”

“That’s what the J stands for,” he added to laughter, joking that the “J” in Donald J. Trump stood for “genius.”

Fox told the crowd that he was reminded of former President Obama when he first met Buttigieg, who served as the mayor of South Bend, Ind.

“I just met the next president of the United States, and I felt the same way when I saw Pete,” Fox said.

“I was watching the debate last night, and it occurred to me — I love all the Democratic nominees,” Fox, 58, said Saturday before poking fun at Buttigieg’s primary rival Vermont Sen. Bernie Sanders. “But they’re all yelling at me. And I’m sitting there going, ‘Why are you yelling at me, Bernie, what did I do to you?’”

The line earned laughs from the crowd of nearly 1,000 people who came to see the 38-year-old former South Bend, Indiana, mayor in Keene, New Hampshire.

“They’re all screaming, but Pete isn’t screaming, he’s just talking to me. And he’s the one guy who’s just quiet and making his point,” Fox continued. “I agree with him on almost all issues — all issues. I can’t think of one I don’t.”

The Back to the Future and Family Ties star, who was diagnosed with Parkinson’s disease at the age of 29, gave a $2,800 maximum donation to Buttigieg’s campaign last year, along with many other celebrities, and later endorsed Buttigieg.

“I met him, this was early on, and he was just starting to make a splash,” Fox said of Obama. “And I talked to him, and I was so impressed with him, and I called my wife afterward, and said, ‘I just met the next president of the United States.’ And I felt the same way when I saw Pete.”

A number of other celebrities have endorsed Buttigieg, including actress Gwyneth Paltrow and actor Bradley Whitford, who fundraised for Buttigieg in April.