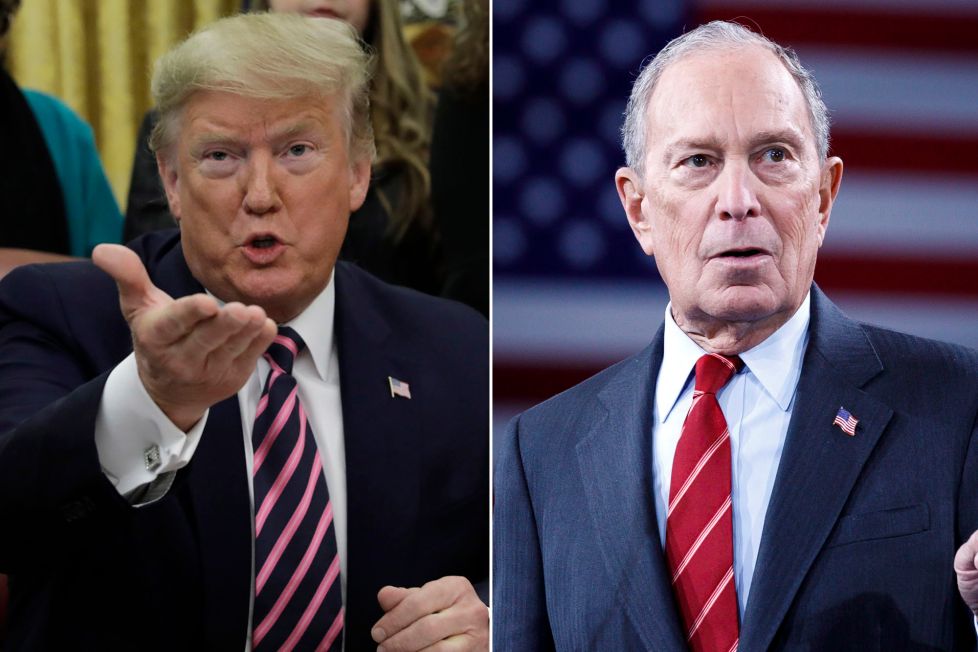 President Trump called Mike Bloomberg a ‘TOTAL RACIST’ after the emergence of audio of the former New York mayor adamantly defending the use of stop-and-frisk policing in minority communities.

The issue is a fraught one for Bloomberg, who has since apologized for his prior views, particularly as he competes for minority voters in a crowded Democratic field.

The racism charge is noteworthy coming from Trump – who himself supports stop and frisk, and has made cracking down on crime and immigration a keystone of his presidency. 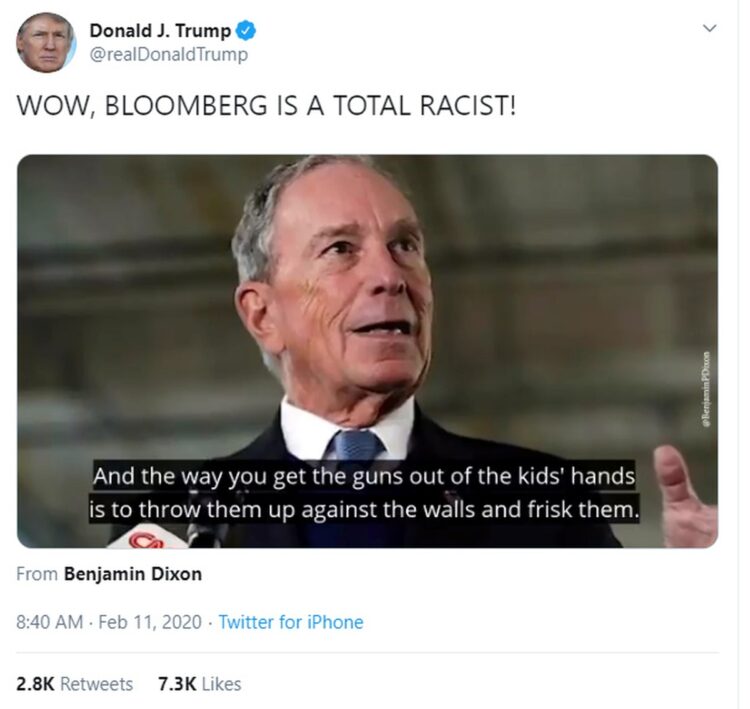 Without explanation the Tweet was taken down – but Trump followed up with an attack on the billionaire’s golf game.

Bloomberg apologized today amid the uproar.

‘I apologize. I own it. And there’s nothing – I’m going to live with it. My heart, I think, was in the right place of trying to do something of reducing murders but the police – I didn’t pay as much attention to them as I should have. And you know, I apologize,’ Bloomberg said.

The audio reveals Bloomberg defending the tough police tactics in a 2015 speech to the Aspen Institute, where he not only touts the plan but also acknowledges that part of the strategy is to ‘put all the cops in minority neighborhoods’ with the hope of tackling gun violence.

‘Ninety-five percent of murders- murderers and murder victims fit one M.O. You can just take a description, Xerox it, and pass it out to all the cops,’ Bloomberg told the audience. ‘They are male, minorities, 16-25. That’s true in New York, that’s true in virtually every city … And that’s where the real crime is. You’ve got to get the guns out of the hands of people that are getting killed,’ he said.

‘So one of the unintended consequences is people say, ‘Oh my God, you are arresting kids for marijuana that are all minorities.’ Yes, that’s true. Why? Because we put all the cops in minority neighborhoods,’ Bloomberg says.

‘Yes, that’s true. Why do we do it? Because that’s where all the crime is. And the way you get the guns out of the kids’ hands is to throw them up against the wall and frisk them… And then they start… ‘Oh I don’t want to get caught.’ So they don’t bring the gun. They still have a gun, but they leave it at home.’

Bloomberg at the time touted the policies as part of his metrics-driven anti-crime policies. But they outraged minority communities and civil liberties groups, who successfully fought to curtail the policies.

Bloomberg blasted back in a statement: ‘President Trump’s deleted tweet is the latest example of his endless efforts to divide Americans. I inherited the police practice of stop-and-frisk, and as part of our effort to stop gun violence it was overused. By the time I left office, I cut it back by 95%, but I should’ve done it faster and sooner. I regret that and I have apologized — and I have taken responsibility for taking too long to understand the impact it had on Black and Latino communities.’

He continued: ‘But this issue and my comments about it do not reflect my commitment to criminal justice reform and racial equity. I believe we need to end mass incarceration and during my tenure we reduced incarceration by 40% and juvenile confinement by more than 60%. We created the Young Men’s Initiative to help young men of color stay on track for success, which President Obama built on to create My Brother’s Keeper. And we overhauled a school system that had been neglecting and underfunding schools in Black and Latino communities for too long.’

He added: ‘In contrast, President Trump inherited a country marching towards greater equality and divided us with racist appeals and hateful rhetoric. The challenge of the moment is clear: we must confront this President and do everything we can to defeat him. The President’s attack on me clearly reflects his fear over the growing strength of my campaign. Make no mistake Mr. President: I am not afraid of you and I will not let you bully me or anyone else in America. Between now and November, I will do everything I can to defeat you whether I am on the ballot or not.’

Trump’s attack comes as Bloomberg has ticked up in the polls after a $350,000,000 spending spree.

He also has 2,000 people on the payroll – dwarfing the skeleton crew Trump had working for him at this point of his ultimately successful presidential run.

Trump’s campaign manager Brad Parscale joined in and retweeted the comments. ‘All the money in the world can’t undo this,’ he wrote.

With a divided Democratic field, there is a chance Bloomberg could break out as the party’s left wing and center do battle during the first four primaries.

He also picked up support from a greater share of African American voters in the latest Quinnipiac University poll.

He is skipping the first four primaries and focusing on Super Tuesday states.

Trump himself is an unusual messenger for the ending stop and frisk.

In 2018, he called for then Attorney General Jeff Sessions to use the policies to ‘help straighten out the terrible shooting wave’ in Chicago.

‘It works, and it was meant for problems like Chicago: Stop and frisk,’ Trump said in a Florida speech in October 2018, after backing the policy for several years.