Trump Fans Scream “Lock Her Up” At Latest Rally – This Time Aimed At Pelosi, Not Clinton 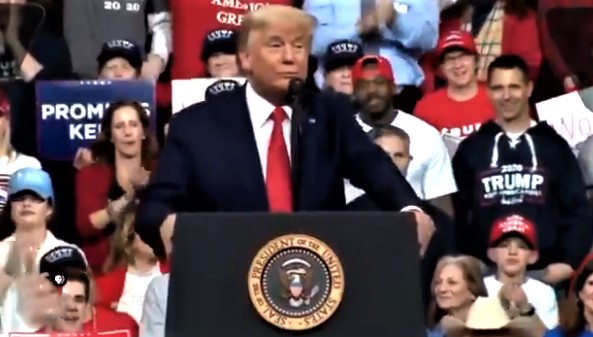 Supporters at President Trump’s rally in New Hampshire on Monday chanted “lock her up” about Speaker Nancy Pelosi (D-Calif.).

The chant broke out as Trump complained about Pelosi’s conduct during his State of the Union address last week.

“I had somebody behind me who was mumbling terribly. Mumbling,” Trump said, mocking Pelosi. “Very distracting.”

The crowd of thousands in Manchester coalesced into chants of “lock her up.” Trump stood at the podium nodding his head and mouthed the words “that’s true.”

“No, it was very distracting,” he added. “I’m speaking and a woman is mumbling terribly behind me, angry.”

Trump’s crowds began chanting “lock her up” about 2016 Democratic nominee Hillary Clinton and often use the refrain whenever the president mentions her at his rallies. But Monday marked one of the first times it was directed at Pelosi.

Crowd chants lock her up when Trump talks about Nancy Pelosi pic.twitter.com/ZfDXCbuWWf

Tensions between Trump and Pelosi boiled over last week at the State of the Union.

Pelosi reached out for a handshake after Trump handed her a copy of his prepared remarks, but the president appeared to ignore her. Throughout the speech, Pelosi avoided looking at the president and at times shook her head “no” as he spoke about health care and Social Security.

When Trump concluded his address, Pelosi picked up her copy of the prepared remarks and ripped them in half, a moment that dominated cable news in the aftermath of the speech.