President Trump tweeted a message congratulating the Kansas City Chiefs for representing the “Great State of Kansas” after the team’s victory at the Super Bowl in Miami tonight.

You just can’t make this stuff up.

“Congratulations to the Kansas City Chiefs on a great game, and a fantastic comeback, under immense pressure,” Trump wrote in the since-deleted tweet. “You represented the Great State of Kansas and, in fact, the entire USA, so very well. Our Country is PROUD OF YOU!” 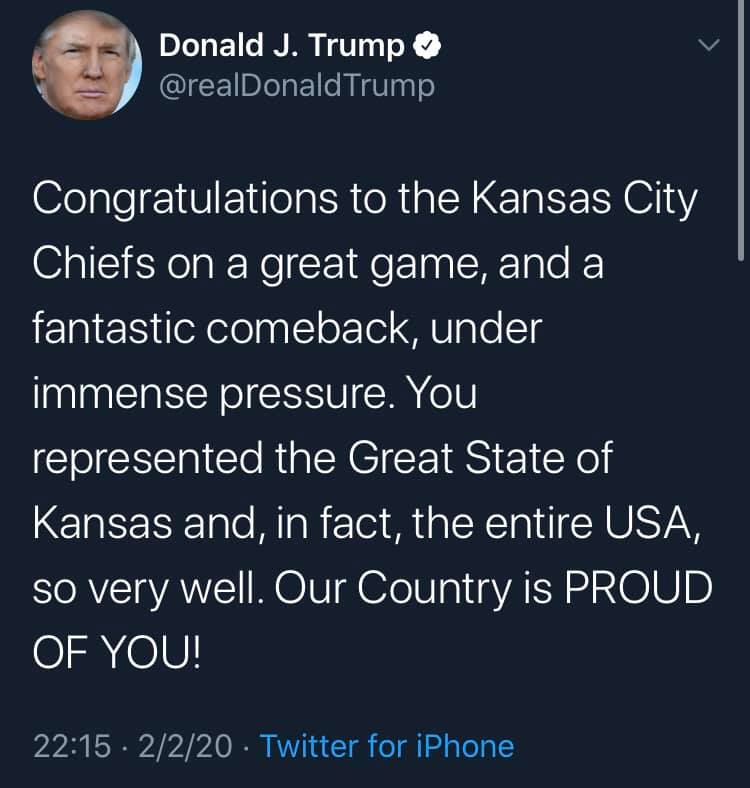 When social media pointed out the error, Trump deleted the tweet.

Shortly after, Trump shared a similar message praising the team and “the Great State of Missouri” after it secured a 31-20 victory against the San Francisco 49ers on Sunday.

The fact Trump seemingly cannot distinguish between Missouri and Kansas delighted many on social media:.

Now that everyone is paying attention to Kansas City, it seems people are confused: We’re from MISSOURI. Check our profile pic – It’s our Missouri-shaped patch.

Once he takes out the sharpie, Kansas City will be in Kansas. https://t.co/29nigCHlSJ

Bringing the sharpie back out of a brief retirement to own the libs. https://t.co/krtUg6IcnS

Quick, someone knock the Sharpie out of Trump’s hands before he redraws the map of Kansas.

Trump congratulated the Chiefs of ‘the Great State of Kansas.’ The team resides in Missouri. https://t.co/61Gz7X7jO2

The Kansas thing is obviously hilarious but even funnier than that is Trump writing about football the same way I used to write book reports when I didn’t read the book. https://t.co/xYmEgfR6IT

Merry Christmas to the great country of Kansas City on your Super Ball comeback. You have always been in Missouri but tonight you proved that you were almost in Kansas. Mommee and daddie are prowd of yeww now go sleep-sleep. #MAGA #SuperBowlLIV ⚾️ pic.twitter.com/RmYsueItqh

The President of the United States doesn’t know what state Kansas City is in.

He had 2 weeks to prepare.