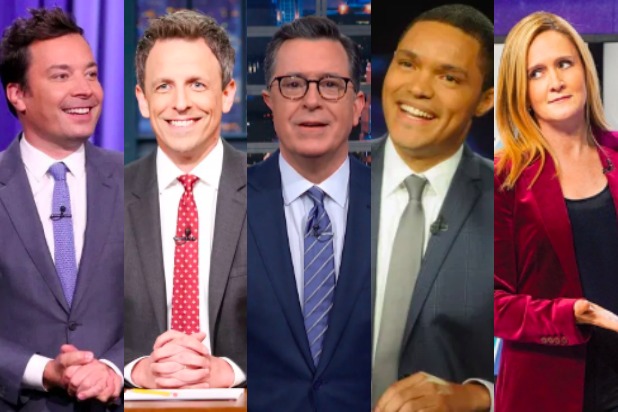 in the wake of the coronavirus pandemic. NBC’s The Tonight Show Starring Jimmy Fallon and Late Night With Seth Meyers, CBS’ The Late Show With Stephen Colbert, Comedy Central’s The Daily Show With Trevor Noah, TBS’ Full Frontal With Samantha Bee, HBO’s Last Week Tonight and Bravo’s Watch What Happens Live will all continue to tape new episodes next week but will do so without in-studio viewers.

Full Frontal is going without an audience for Wednesday’s show as well.

“The safety of our guests and employees is our top priority,” NBC said Wednesday in a statement. “As a precautionary measure, starting Monday, March 16, we have decided to suspend live audiences for The Tonight Show Starring Jimmy Fallon and Late Night With Seth Meyers. Per guidance from New York City officials, the company is hoping to do its part to help to decrease the rate of transmission in our communities. Our shows will continue filming on their regular schedule, and currently, there will be no impact on air dates.”

CBS said in its own statement, “Beginning Monday, March 16, The Late Show With Stephen Colbert will film without a live, in-studio audience. This move is being made out of an abundance of caution regarding the spread of the COVID-19 virus and the uncertainty of the situation for future weeks. Per guidance from New York City officials, CBS and The Late Show are doing their part to help decrease the potential rate of transmission in our communities. There have not been any specific developments at The Ed Sullivan Theater to cause concern for audiences with plans to attend the show tonight, tomorrow, or who have attended in recent weeks. For several weeks, the team at the theater has been taking all necessary precautions to protect everyone who enters and works in the theater with enhanced cleaning and sanitizing procedures.

“For the past several weeks, The Late Show producers have consulted daily to share information with other New York-based late night shows, who will also be moving forward without an audience.”

Said Comedy Central, “Our top priority is the safety of our guests and staff. Beginning Monday, March 16th, Comedy Central’s NY based late night series, The Daily Show With Trevor Noah, will film without a live, in-studio audience. This move is being made out of an abundance of caution and concern regarding the spread of the COVID-19 virus and per guidance from New York City officials to take appropriate actions.

“There have been no developments at The Daily Show’s studio to cause concern for audience members who have plans to attend the show tonight or tomorrow. Measures have been taken to protect everyone who enters and works in the office and studio with enhanced cleaning and sanitizing procedures.”

HBO likewise put out a statement noting Last Week Tonight will go without in-studio viewers starting Sunday. “We are taking this precaution in accordance with best practices as outlined by New York City officials,” the pay cabler said. “We will continue to monitor the situation.”

The moves by the late-night shows follow similar precautions taken by morning news programs Good Morning America and Today and daytime talk shows including Dr. Phil, The View and Live With Kelly and Ryan. Other shows with live audiences are monitoring the spread of the virus and will make changes as warranted.

There were more than 1,000 confirmed cases of COVID-19, the disease resulting from the virus, in the U.S. and 31 deaths.

The Los Angeles-based Late Late Show With James Corden is still allowing audiences for the time being, but CBS is continuing to monitor the situation and will make changes as necessary. NBC’s A Little Late With Lilly Singh, which also shoots in Los Angeles, has wrapped production for the season.

TBS’ Conan pretaped its Wednesday and Thursday shows and is going on a preplanned, two-week hiatus starting Monday.

NBC’s Saturday Night Live is also on hiatus; its next episode is scheduled for March 27.

The coronavirus outbreak has also caused upheaval in other parts of the entertainment industry.

SXSW canceled its annual festival in Austin, Texas, and the Coachella and Stagecoach music festivals in Southern California have been delayed.

MGM has pushed back the release of its James Bond movie No Time to Die from April to November.

And several media companies have canceled or modified their upfront presentations to advertisers as a precaution.

The NCAA announced today that fans will not be able to attend its championships including the 2020 men’s and women’s NCAA Tournaments.

“I have made the decision to conduct our upcoming championship events, including the Division I men’s and women’s basketball tournaments, with only essential staff and limited family attendance,” NCAA President Mark Emmert said in a statement. “While I understand how disappointing this is for all fans of our sports, my decision is based on the current understanding of how COVID-19 is progressing in the United States.”

The decision was made in conjunction and with advisement from the CDC, and with the NCAA’s recently-formed advisory panel which consists of experts in the public health, epidemiology and medical fields.

It took many by surprise in the industry, including Baylor players at the Big 12 Tournament.

The NBA’s Golden State Warriors will play a game Wednesday without fans in its San Francisco arena.