JOEMENTUM! Biden Campaign Comes From Near Death To HUGE Victories On Super Tuesday 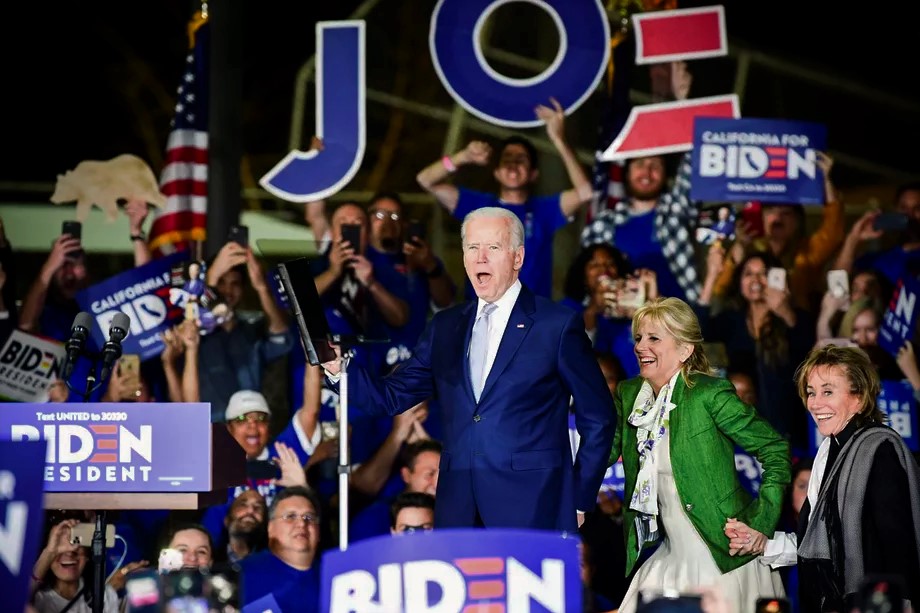 Joe Biden raced to a series of state victories as Super Tuesday delivered him a massive boost in momentum and delegates, while Bernie Sanders took California and Mike Bloomberg’s campaign said he plans to ‘reassess’ whether he should stay in the race tomorrow.

Biden’s early lead caused a dramatic shift and left Bernie Sanders, until last week the frontrunner, gasping to figure out what happened.

And Texas, which no one saw coming.

It was a stunning series of victories for a 77-year-old who had been almost entirely written off within the last three weeks.

In Los Angeles, Biden took to the stage to cheers from a crowd experiencing a night none of them had expected.

‘It’s a great night and it seems to be getting even better,’ he said to cheers. ‘They don’t call it Super Tuesday for nothing! It may be over for the other guy.’

Energized, coherent and not put off even by two militant vegan protesters who ran onto the stage to protest against the dairy industry, he painted himself as the one Democrat who can take on Trump.

‘A lifelong Democrat, an Obama-Biden Democrat,’ he said to cheers – a pointed way to contrast himself to Sanders, who is an independent senator.

In Vermont, a far less upbeat Sanders downplayed the results of the night, pinning his hopes on California, saying there was ‘more to come,’ pivoting to a victory speech and a string of attacks on Biden.

‘Tonight I tell you with absolute confidence we are going to win the Democratic nomination,’ he said.

It was Bloomberg, whose astonishing $1 billion spending netted him victory only in American Samoa, led him to become the night’s most immediate loser.

Bloomberg’s aides said his campaign chiefs were considering their next move.

Dropping out would hand a huge victory to Biden and also the potential for Bloomberg’s almost unlimited resources to be thrown behind Biden immediately.

Since the time of John F. Kennedy, voters had always backed the home state nominee until Biden smashed through that history.

Warren will still gain delegates from Massachusetts because she passed the 15 percent viability threshold with 20 percent of the vote, but failing to win your own state is almost invariably the end for presidential campaigns.

Warren has deep pockets, thanks to mostly small-dollar supporters willing to chip in, especially after debates, but she will come under massive pressure in the next few hours to get out of the race from both Biden and Sanders’ camps.

Sanders in particular will want her out after she cast herself as capable of getting his ideas done.

Sanders emerged the victor of his home state Vermont then went on to pick up California, Colorado and Utah.

The path to the delegation in Milwaukee now runs through a mini-Super Tuesday on March 10, when Missouri, Michigan, Washington and Mississippi vote.

Sanders had appeared to be ahead in Michigan but Biden’s upset in Minnesota is likely to weigh heavily there, and the combined demographic of African-Americans and disaffected blue collar voters could play to Biden’s strengths.

The following Tuesday, March 17, offers another selection of massive delegate counts when Florida, Illinois and Ohio all vote, along with Arizona.

For Sanders, the loss of momentum from a rocky Super Tuesday could be critical.

In 2016 he stayed in by rallying his base and railing against an ‘establishment’ determined not to give him the nomination and to install an ‘inevitable’ candidate in Hillary Clinton.

That may be more difficult as he faces in Biden an opponent whose comeback narrative offers him some of the advantages of the underdog, and whose narrative of empathy and standing up for those who were left behind overlaps with Sanders’ more radical rhetoric.