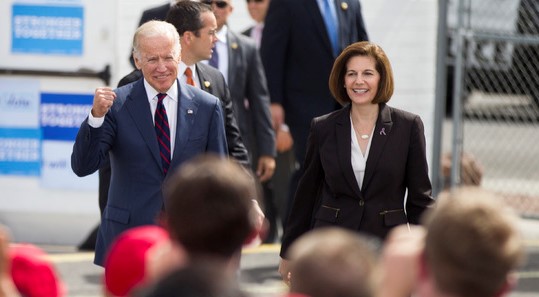 Joe Biden has narrowed down his list of potential running mates to a small group of women in recent weeks after pledging that his nominee for vice president would be female during the last Democratic debate earlier this month.

Biden told former Senate Majority Leader Harry Reid that Senator Catherine Cortez Masto is in his “top three” picks for the role of his running mate.

Reid, who represented Nevada in the senate for decades, has expressed his support for her as the former vice president’s vice presidential nominee.

Reid believes Cortez Masto, the first Latina Senator in the U.S., will help Biden garner support from members of the Latino community in the general election.

Cortez Masto’s name has also been mentioned in other recent reports about Biden selecting his potential running mates.

On Tuesday, the Democratic 2020 frontrunner said he is whittling his list and will soon begin a vetting process.

Although Biden declined to name any candidates, unnamed sources with direct knowledge of the matter told CNBC that Senators Kamala Harris and Amy Klobuchar are also on the shortlist, as well as Michigan Governor Gretchen Whitmer and Florida Rep. Val Demings.

Harris and Klobuchar, Biden’s former rivals for the Democratic nomination, both endorsed the former vice president after they dropped out of the race.

While Whitmer has also recently endorsed Biden, Cortez Masto has not officially backed a candidate for president yet.

Cortez Masto, 55, has been serving as senior Nevada Democratic Senator since 2017, after having served as the attorney general of the state from 2007 to 2015.

Before she was elected Nevada attorney general, Cortez Masto had worked as a civil attorney in Las Vegas and a U.S. criminal prosecutor in Washington D.C.

Reid’s enthusiasm for Cortez Masto as Biden’s running mate comes after he endorsed her as his successor in 2016 after he decided not to run for reelection.

Biden said Sunday that he has discussed his vice president options with former President Barack Obama.