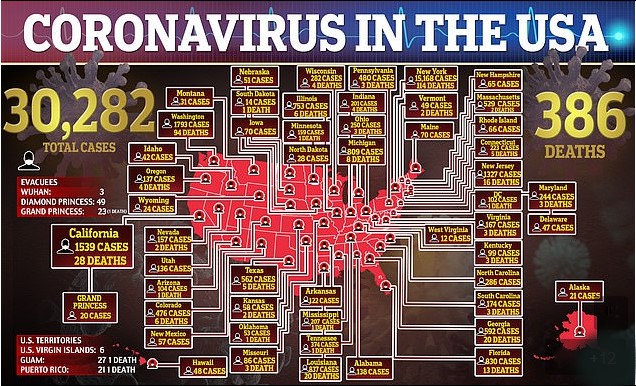 “Senator Rand Paul has tested positive for COVID-19,” Paul’s account tweeted. “He is feeling fine and is in quarantine. He is asymptomatic and was tested out of an abundance of caution due to his extensive travel and events. He was not aware of any direct contact with any infected person.”

“He expects to be back in the Senate after his quarantine period ends and will continue to work for the people of Kentucky at this difficult time,” the thread continued. “Ten days ago, our D.C. office began operating remotely, hence virtually no staff has had contact with Senator Rand Paul.”

Paul’s chief of staff later clarified that he “decided to get tested after attending an event where two individuals subsequently tested positive for COVID-19, even though he wasn’t aware of any direct contact with either one of them.”

Sen. Jerry Moran, R-Kan., told colleagues at Sunday’s policy meeting that he saw Paul at the Senate gym earlier in the day, his communications director confirmed on Twitter.

Paul’s account later tweeted that he visited the gym before finding out he had tested positive.

Paul is the third member of Congress to announce a positive test for coronavirus, following Reps. Mario Diaz-Balart, R-Fla., and Ben McAdams, D-Utah.

Several Republican lawmakers also self-quarantined earlier this month after learned they had interacted with someone who tested positive for the virus at the Conservative Political Action Conference.

In an interview with NBC News, Diaz-Balart said Saturday he is feeling better after a week but said the initial symptoms hit him “like a ton of bricks.”

McAdams, meanwhile, told NBC’s “Today” last week that the symptoms “felt like I had a belt around my chest, and so I couldn’t breathe deeply.”

Paul, a libertarian-leaning member, forced a delay on the Senate’s first coronavirus aid bill by pushing a doomed amendment.

He later voted against it.

Paul’s diagnosis has triggered a discussion about whether senators, many of whom are in older age brackets, should go home immediately or self-quarantine, given their likely contact with Paul, who Paul was on the Senate floor extensively over the last week.

The news created fresh uncertainty about how Congress can finish and pass emergency coronavirus legislation, on which Democrats and Republicans are still struggling to reach a deal.

Sens. Mike Lee and Mitt Romney, both Utah Republicans, were the first two lawmakers to say they would be self-quarantining for two weeks after having “extended” interactions with Paul and would have to miss floor votes.

Sen. Kyrsten Sinema, D-Ariz., criticized Paul in a tweet calling his gym visit “absolutely irresponsible. You cannot be near other people while waiting for coronavirus test results. It endangers others & likely increases the spread of the virus.”

The pandemic has infected more than 300,000 people worldwide, according to Johns Hopkins University.