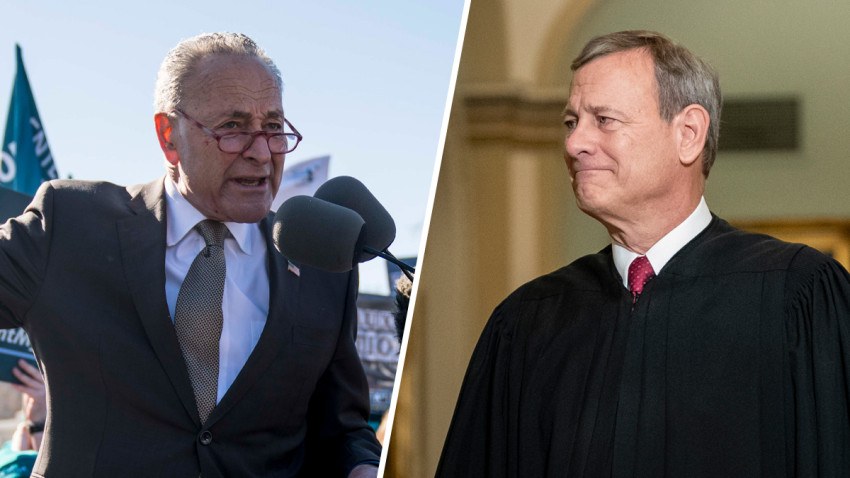 Chief Justice John Roberts issued a rare rebuke of a sitting member of Congress today, chastising the Senate’s top Democrat, Minority Leader Chuck Schumer, for saying at rally outside the Supreme Court that President Trump’s two nominees to the court would “pay the price” for a vote against abortion rights.

In a highly unusual statement issued by the court, the chief justice recounted comments Schumer (N.Y.) had directed at Neil Gorsuch and Brett Kavanaugh and said: “Justices know that criticism comes with the territory, but threatening statements of this sort from the highest levels of government are not only inappropriate, they are dangerous. All members of the court will continue to do their job, without fear or favor, from whatever quarter.”

Schumer, speaking to abortion rights supporters Wednesday morning as the Supreme Court heard an important abortion case from Louisiana, singled out the two by name.

“I want to tell you Gorsuch, I want to tell you Kavanaugh, you have released the whirlwind, and you will pay the price,” Schumer said. “You won’t know what hit you if you go forward with these awful decisions.”

The whirlwind was just beginning.

Pugilistic Republicans and Democrats raced from their respective corners, led by the president who wrote on Twitter: “This is a direct & dangerous threat to the U.S. Supreme Court by Schumer. If a Republican did this, he or she would be arrested, or impeached. Serious action MUST be taken NOW!”

The GOP denounced Schumer and tweaked the media for what they said was a lack of outrage.

Democrats demanded to know why Roberts had not spoken out when Trump last week singled out liberal Justices Ruth Bader Ginsburg and Sonia Sotomayor for criticism, or defended the federal judge Trump denounced for her oversight of the trial of his friend Roger Stone.

The episode underscored the partisan politics that have engulfed the fight over the judiciary, which is supposed to be the nonpartisan branch of the government.

On the Republican side, House Minority Whip Steve Scalise (R-La.) shared a snippet of Schumer’s remarks on Twitter with a red siren icon, calling Schumer “unhinged.”

“Think about this, if a Republican threatened Justice Sotomayor or Justice Ginsburg, it would be the biggest story not just in Washington but all across America,” Sasse said in a statement.

Trump slams Sotomayor and Ginsburg, says they should recuse themselves from ‘Trump-related’ cases

“But, Chuck Schumer’s bully tactics aren’t getting much air time right now because there’s so many people in bed with his defense of abortion and his attack on an independent judiciary,” Sasse continued.

“It takes a certain amount of chutzpah for John Roberts to condemn these comments by Chuck Schumer after saying nothing when President Trump attacked two Democratic-appointed justices just last month,” said Brian Fallon of the liberal Demand Justice.

Schumer’s remarks came during the circuslike atmosphere that plays out in front of the Supreme Court whenever it hears a controversial case, especially abortion. With protesters from both sides of the issue crowding the sidewalk, Schumer spoke to abortion rights supporters.

“We stand here today because behind me, inside the walls of this court, the Supreme Court is hearing arguments for the first major abortion rights cases since Justices Kavanaugh and Justice Gorsuch came to the bench,” Schumer said, his mention of the justices drawing boos.

“We know what’s at stake. Over the last three years, women’s reproductive rights have come under attack in a way we haven’t seen in modern history.”

After making his comments about “paying a price,” Schumer said: “We will tell President Trump and Senate Republicans who have stacked the courts with right-wing ideologues that you’re going to be gone in November and you’ll never be able to do what you’re trying to do now ever, ever again. You hear that over there on the far right? You’re gone in November.”

Last month, in tweets and comments at a news conference in India, Trump called on Sotomayor and Ginsburg to recuse themselves from anything “Trump-related.”

Trump interpreted as biased a dissent from Sotomayor about his administration’s tendency to seek emergency interventions from the Supreme Court.

He reminded Ginsburg of remarks she made about him as a candidate in 2016, for which she has expressed regret.