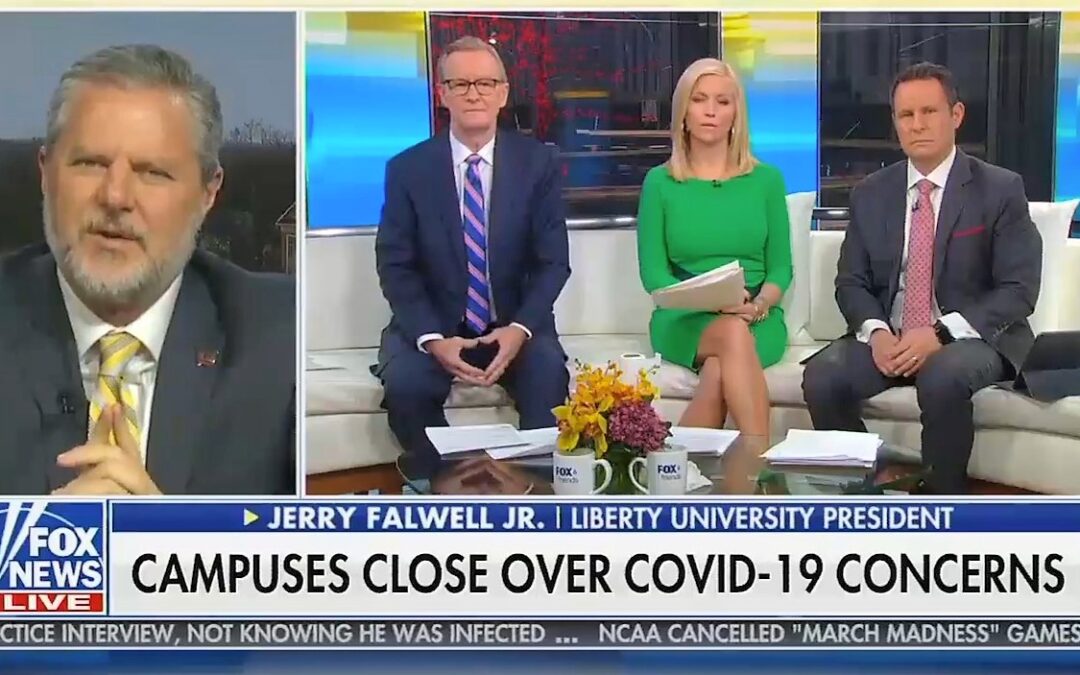 Jerry Falwell Jr., a staunch Trump ally and president of Liberty University, suggested on Fox News’s “Fox & Friends” this morning that the coronavirus outbreak was orchestrated by North Korea and China to sabotage Trump.

“You remember the North Korean leader promised us a Christmas present for America? Back in December,” he said. “Could it be they got together with China and this is that present? I don’t know. But it really is something strange going on.”

The hosts did little to push back on the claim, and Falwell appeared to double down on the allegations of biological warfare, sharing the segment on Twitter with the caption: “Could COVID-19 be the ‘Christmas Gift’ North Korea’s leadership promised America back in December?”

Could COVID-19 be the “Christmas Gift” North Korea’s leadership promised America back in December?https://t.co/qMf91I6CgA

China, where the virus originated, has suffered far greater consequences from the virus than the U.S. both in terms of fatalities and economic impact. Neither public health officials nor members of the administration have mentioned the possibility of the virus being a case of retaliation from North Korea or China.

Earlier in the segment, Falwell said the media is fabricating coronavirus coverage so it appears it is a fault on the president’s leadership after former special counsel Robert Mueller’s probe and the president’s impeachment failed to remove him from office.

Falwell said on the segment he is not canceling classes on his campus as many other major universities have to avoid the spread of the virus.

Fawell’s defense of Trump has been over-the-top since the 2016 election.

Last year, an activist Christian group launched a petition drive to get the Virginia Attorney General’s office and the IRS to open criminal investigations into Liberty University and Falwell.

“The response has been great so far, more than we expected,” said Rev. Nathan Empsall at the time. “But that shouldn’t come as a surprise given how fed up so many Christians are with the way Falwell and others have hijacked the Gospel to represent their hypocritical own self-interests rather than Christ’s teachings of love and justice.”

The drive comes in the wake of exposés by Politico, The Miami Herald and other news outlets which have accused Falwell of, among other things, using the influential and ultra-conservative Christian college to enrich himself and his cronies.

Falwell is also alleged to have engaged in activities that run counter to the Christian college’s ethos like sharing photos of his wife, Becki, in French maid costume with employees, graphically describing their sex life, and drinking and dancing in Miami Beach nightspots.

Then there’s the strange relationship between Falwell, his wife and a former pool attendant at the Fontainebleau hotel in Miami Beach; the family’s investment in a gay-friendly youth hostel; and an attempted hush-money arrangement engineered by the president’s former fixer, Michael Cohen.