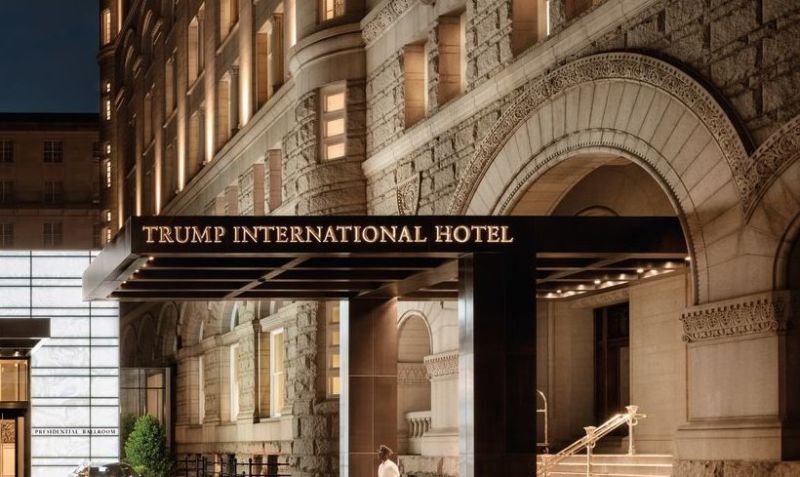 Reeling from the global fallout of the coronavirus pandemic, President Trump’s family business has cut back hotel operations, closed some golf courses and restaurants and shed dozens of workers — all while pushing to keep other properties open and promote them on social media.

In recent days, the Trump Organization cut staff from hotels in New York and Washington, halted new reservations at a hotel overlooking the Las Vegas Strip and closed golf courses in Los Angeles and the Miami area.

It also closed the Mar-a-Lago club in Florida, which normally would be at a peak right now, with regular seasonal visits by Trump himself.

The cutbacks, expected to continue in coming days, were a last resort, a company executive said, as the priority had been keeping thousands of employees and contract workers on the job.

The company has a portfolio of more than a dozen golf clubs and at least partially owns or operates five-star hotels in Chicago, Hawaii, Las Vegas, New York, Vancouver and Washington, as well as Ireland and Scotland.

Generally, the company has folded the tent only when local authorities mandated it, despite a growing national urgency to limit social gatherings and close nonessential businesses.

In an interview, Eric Trump, the president’s son who manages the family business, said the company was trying to limit shutdowns.

For those properties that remain open, the company has continued promotional campaigns on social media and through direct email.

This morning, Trump Golf Links at Ferry Point, a public course in the Bronx, invited guests on Twitter to play a round: “Looking to get some #freshair? The golf course is a great place to relieve stress and exercise social distancing #openingday.”

Similarly, Trump’s golf club in Hudson Valley, N.Y., was closed for the winter season but opened its course to members on Wednesday as a sort of cure for cabin fever, according to an email reviewed by The New York Times.

“Governor Cuomo has recommended that we use public spaces and parks for exercise and relaxation,” the club said in the email to members. “With this in mind, we are opening the golf course to give you an opportunity to get out of the house and enjoy the great outdoors!”

The Trump Organization will undoubtedly take a major hit from the coronavirus crisis, though it is relatively well positioned, in part because it has increasingly relied on rental revenue from office buildings in New York and San Francisco.

For now, Trump’s company has continued to accept new reservations at its hotels in Chicago and on Central Park West in New York.

But the New York hotel is shedding staff, laying off 40 employees so far, and reducing the hours of others.

In a letter to owners of hotel units in the building on Thursday, Matthew Vandegrift, general manager of the property, called it an “unprecedented event” and warned of a “significant shortfall in revenues.”

“While we recognize that hope is not a strategy, I can assure you we are thoroughly analyzing expenses,” Vandegrift wrote. “Strategies have been deployed to mitigate the expected financial losses as a result of COVID-19.”

Also this week, the Trump Organization shuttered most amenities inside its Washington hotel — the restaurant, bar and spa — to comply with a local order.

Ordinarily a magnet for Republican officials and lobbyists, the property was turning away anyone without a room key or a reservation on Wednesday.

The hotel has roughly 5 percent occupancy, and 95 percent of the staff is not working at the moment, according to John Boardman, the executive secretary-treasurer of Unite Here Local 25, a union with 174 workers at the hotel.

He called it a “real skeleton staff” in the same predicament as other nearby hotels.

The union is negotiating benefits for displaced workers with the Trump hotel and others.

“The industry is devastated,” Boardman said. “It is devastated in the near term, and what we are starting to see is a round of longer-term cancellations as the uncertainty increases. We are not expecting people to be called back to work any time soon.”

Trump’s Mar-a-Lago club was the site of events earlier in March that included several people who have since been confirmed to have coronavirus, including two Brazilian officials who accompanied President Jair Bolsonaro of Brazil to a dinner with Trump at the resort on March 7.

Last week, The Trump Organization sent out a notice to Mar-a-Lago members notifying them that the club would be cleaned on Monday but remain open the rest of the week.

Now, the club has closed, at least temporarily, based on calls for social distancing.

Not far away, at the golf resort in Doral, another of Trump’s highest-profile properties, the company was still accepting new reservations today, though it had shut down its courses and restaurants.

Still, according to a hotel employee, the family pool remained open.