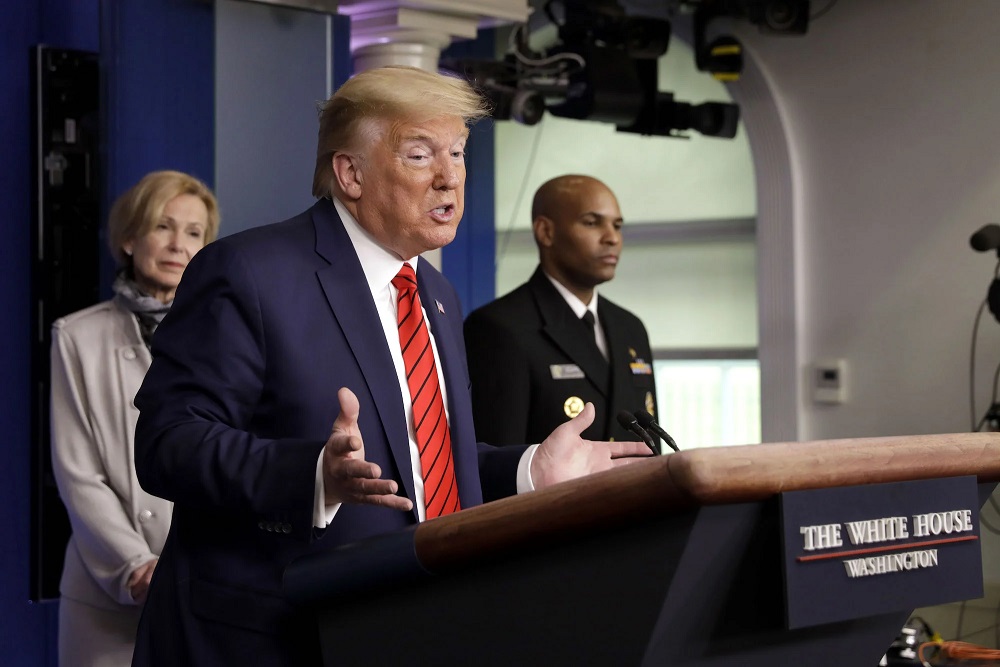 Analysts at Morgan Stanley have issued a warning that if President Trump tries to relax containment measures against coronavirus too quickly, the economic damage could be even worse.

Trump said today that his goal was a nationwide return to normalcy by Easter Sunday on April 12, in a bid to restart the economy and get millions back to work.

Morgan Stanley analysts say that his strategy to limit the pandemic’s economic damage could backfire, however.

‘If the White House were to relax the social distancing measures ‘soon,’ well ahead of the necessary timeline to have a significant impact on our view, it would raise the risk of increasing the peak or delaying the time to peak,’ they wrote in a note on Tuesday.

Delaying or raising the peak of coronavirus cases raises the risk of deadly chaos in hospitals, rolling shutdowns that take companies out of action, and widespread panic that would depress consumer spending.

The investment banking giant said that the country’s economic prospects are looking grimmer by the day as the pandemic unfolds.

‘High positive testing rates and mixed lock down measures raise [the] risk that our base case forecast may be optimistic,’ the Morgan Stanley analysts wrote.

Although U.S. stocks surged on Tuesday, with the Dow Jones Industrial Average rising more than 11 percent on hopes of a stimulus deal, experts say the economic pain is likely far from over.

In a separate note on Sunday, Morgan Stanley’s economists revised their forecasts to issue a grim warning about an unprecedented plunge in U.S. gross domestic product.

The firm predicts that quarter-on-quarter annualized GDP will decline 2.4 percent in the first three months of 2020, and then drop another 30 percent in the second quarter.

That would be triple the largest quarterly drop in GDP on record, which is a 10 percent decline in the first quarter of 1958 during the ‘Eisenhower Recession.’

Meanwhile, the World Health Organization has warned the United States has the potential to become the new coronavirus epicenter following a ‘very large acceleration’ in infections.

Over the past 24 hours, 85 percent of new cases were from Europe and the United States, WHO spokeswoman Margaret Harris told reporters today.

Of those, 40 percent were from the United States.

Italy currently has the highest number of coronavirus deaths in the world with more than 6,000, after abruptly overtaking China – where the outbreak began in late December and 3,281 people have died – late last week.

But the US is on pace to become the new leader after its death toll climbed to 628 today, with more than 50,000 cases reported nationwide.

Over the past week, there has been a surge of new cases as testing across the country increases.

On Monday alone, more than 11,000 new positive cases were confirmed and 100 new deaths were reported, the largest single-day spike to date.

Seventeen hard-hit states are now in various forms of lockdown as experts say the peak is yet to come and that the current state of crisis will last for another several months, at least.

Asked whether the United States could become the new epicenter, Harris said: ‘We are now seeing a very large acceleration in cases in the US. So it does have that potential.’

‘They [the US] have a very large outbreak and an outbreak that is increasing in intensity,’ she added, noting that she expects large increases in case numbers and deaths globally, which currently stand at 392,780 and 17,159 respectively.