Trump Will SKIP Annual St. Patrick’s Day Tribute – Refuses To Be Seated Next To Pelosi 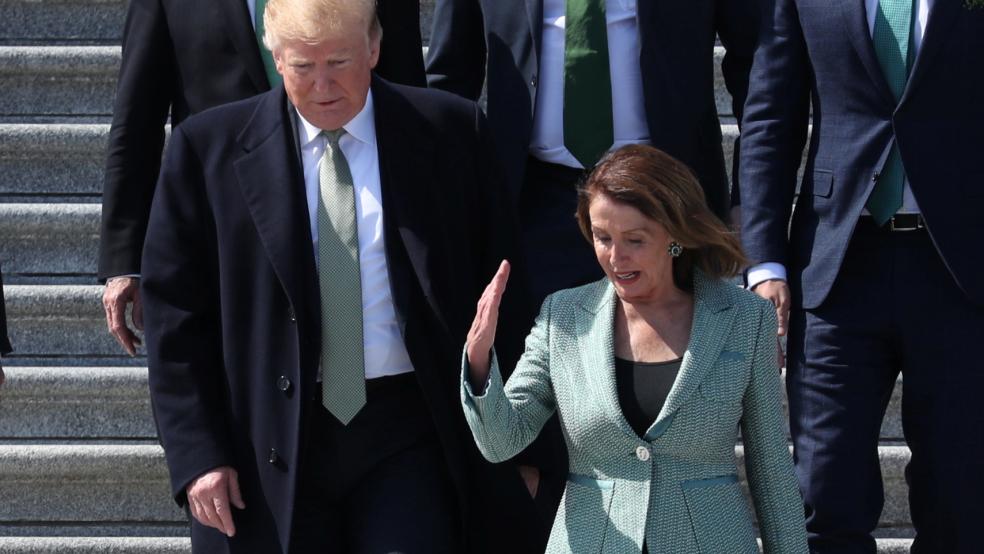 Donald Trump demonstrated more pettiness today announcing he won’t attend the annual St. Patrick’s Day lunch in the Capitol this Thursday because Speaker Nancy Pelosi will be there.

It’s the first time a president has skipped the traditional, non-partisan luncheon since George W. Bush missed it in 2003, shortly before the United States invaded Iraq.

The luncheon – formally called the Friends of Ireland Luncheon – is hosted by the Speaker of the House, who is Pelosi, and honors the taoiseach of Ireland.

Leo Varadkar, the current taoiseach of Ireland, is traveling to attend it, as Irish leaders do every year.

But Trump won’t be there.

Pelosi’s controversial ripping up the text of Trump’s State of the Union Address last month sparked fury from the White House.

Trump had refused to shake her hand prior to his speech.

Relations between the two heads of the executive and legislative branches of government have been tense for months and grown colder since the speaker launched the impeachment inquiry in September.

The Senate voted last month to acquit the president on the two articles against him.

The last time the two met before that was an October 16 meeting on Syria at the White House, where she and other top Democrats walked out.

She was seated at the head table during Trump’s remarks and shook her head at one point during them.

She pursed her lips a few times as he spoke.

After the impeachment inquiry was over, Trump mocked Speaker Pelosi’s faith at the National Prayer Breakfast in Washington D.C. in February.

‘I don’t like people who use their faith as justification for doing what they know is wrong. Nor do I like people who say I pray for you when they know that’s not so. So many people have been hurt, and we can’t let that go on,’ he said.

Pelosi, a devout Catholic, has repeatedly said she prays for the president.

The lunch is traditionally an opportunity for politicians from both political parties to put aside their political differences and celebrate Irish-American heritage.

The speaker’s office slammed the president’s decision to skip this week’s luncheon.

‘There has never been stronger support in the Congress and in the country for the U.S.-Ireland bilateral relationship. One would think that the White House could set petty, partisan politics aside for this historic occasion,’ Pelosi spokesman Drew Hammill said.

‘Since the Speaker has chosen to tear this Nation apart with her actions and her rhetoric, the President will not participate in moments where she so often chooses to drive discord and disunity, and will instead celebrate the rich history and strong ties between the United States and Ireland at the White House on March 12,” Deere said in a statement.