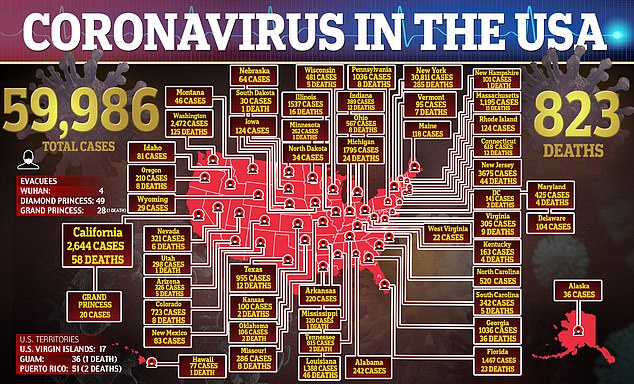 President Trump again used his daily White House briefing on the coronavirus to rail against the press and Democrats, arguing today that they oppose his idea to potentially reopen businesses within weeks because they want the economy to fail and hurt his re-election prospects.

In recent days, Trump has said he wants business in large parts of the country to re-open by Easter, defying public health experts who say people need to continue isolating and social distancing for several months.

When reporter Paula Reid of CBS News asked if the president’s Easter timeline was linked to his political interests, Trump lashed out.

The coronavirus death toll has risen to 823 in the United States with more than 60,000 confirmed cases as the burdens of the pandemic continue to intensify across the country.

New figures released today show that New York, which is the epicenter of the US outbreak, now has 50 percent of the country’s total confirmed coronavirus cases.

Washington state, which was initially the epicenter following an outbreak at a Seattle nursing home, now has 2,472 confirmed cases and 125 deaths.

Trump, however, has focused on politics, not empathy for the hundreds of victims and their families.

The LameStream Media is the dominant force in trying to get me to keep our Country closed as long as possible in the hope that it will be detrimental to my election success. The real people want to get back to work ASAP. We will be stronger than ever before!

The plan, Trump has said, would be to lock down hotspots like New York where there are a high number of cases and let businesses in other parts of the country reopen in the coming weeks.

Vincent Racaniello, a professor of microbiology and immunology at Columbia University, told BuzzFeed News Monday that there isn’t enough testing being done in the US to know who and how many people are infected, making any plan to keep infection hot spots locked down impossible.

“If you just lock down who have clinical symptoms, it’s not going to do a damn thing,” Racaniello said. “For god’s sake, do people really not have any patience in this country. It was finite in China. It will be finite here.”

Additionally according to estimates from The New York Times, many states could hit peak cases in May, several weeks after Easter.