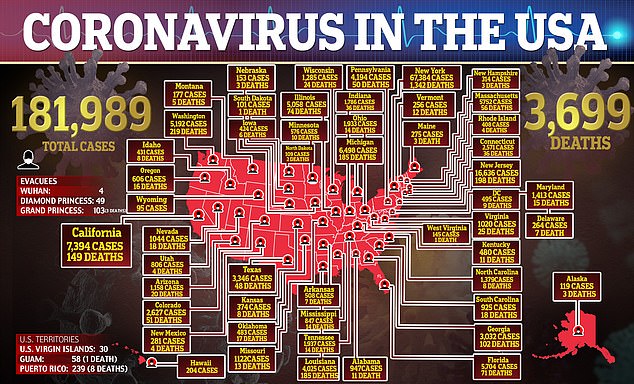 White House economists published a study last September that warned a pandemic disease could kill a half million Americans and devastate the economy.

It went unheeded inside the administration.

In late February and early March, as the coronavirus pandemic began to spread from China to the rest of the world, President Trump’s top economic advisers played down the threat the virus posed to the U.S. economy and public health.

“I don’t think corona is as big a threat as people make it out to be,” the acting chairman of the Council of Economic Advisers, Tomas Philipson, told reporters during a Feb. 18 briefing, on the same day that more than a dozen American cruise ship passengers who had contracted the virus were evacuated home.

He suggested the virus would not be nearly as bad as a normal flu season.

The 2019 study warned otherwise — specifically urging Americans not to conflate the risks of a typical flu and a pandemic.

The existence of that warning undermines administration officials’ contentions in recent weeks that no one could have seen the virus damaging the economy as it has.

The study was requested by the National Security Council.

One of the authors of the study, who has since left the White House, now says it would make sense for the administration to effectively shut down most economic activity for two to eight months to slow the virus.

The coronavirus has spread rapidly through the United States and its economy, killing more than 3,000 Americans and plunging the country into what economists roundly predict will be a deep recession.

A mounting number of governors and local officials have effectively shut down large amounts of economic activity and ordered people to stay in their homes in most situations, in hopes of slowing the spread and relieving pressure on hospitals.

Administration officials today released public health models that have driven those decisions, including projections of when infection rates might peak nationally and in local areas.

Government officials estimated Tuesday that the deadly pathogen could kill between 100,000 and 240,000 Americans.

As officials debate when they might begin to reopen the shuttered sectors of the country, it is unclear how the White House is tallying the potential benefits and costs — in dollar figures and human lives — of competing timetables for action.

Asked by Fox News on Sunday about the economic impact and whether the United States was in recession, Treasury Secretary Steven Mnuchin declined to say. “Are we going to have reduced economic activity this quarter? Absolutely,” he said. “I think next quarter, a lot depends on how quickly the curve of the medical situation works.”

The director of the National Economic Council, Larry Kudlow, told ABC News on Sunday that “it could be four weeks, it could be eight weeks” before economic activity resumes. “I say that hopefully,” he said, “and I say that prayerfully.”

Outside economists have been pumping out analyses on the optimal length of a shutdown almost daily.

One that has been shared with officials inside the White House comes from Anna Scherbina, an author of the 2019 study who is now an economist at Brandeis University and the American Enterprise Institute.

It seeks to determine the optimal length of a national suppression of economic activity, which Scherbina does not define precisely in the paper.

In an interview, she said it would encompass school closures, shutting down many businesses and the sort of stay-at-home orders that many, but not all, states have imposed.

“What it entails is something as drastic as you can get,” Scherbina said. In the United States right now, she added, “we don’t have it everywhere.”

Scherbina’s paper evaluates the trade-offs involved in slowing the economy to fight the spread of the virus by, as the paper puts it, “balancing its incremental benefits against the enormous costs the suppression policy imposes on the U.S. economy.”

In a best-case scenario, Scherbina concludes, a national suppression of economic activity to flatten the infection curve must last at least seven weeks.

In a worst case, where the shutdown proves less effective at slowing the rate of new infections, it would be economically optimal to keep the economy shuttered for nearly eight months.

Suppression efforts inflict considerable damage on the economy, reducing activity by about $36 billion per week, the study estimates.

Scherbina said the optimal durations would remain largely unchanged even if the weekly damage was twice that high.

But the efforts would save nearly two million lives when compared with a scenario in which the government did nothing to suppress the economy and the spread of the virus, Scherbina estimates, because doing nothing would impose a $13 trillion cost to the economy — equal to about two-thirds of the amount of economic activity that the United States was projected to generate this year before the virus struck.

Scherbina based her estimates on the models she built when she was a senior economist at the Council of Economic Advisers and the lead author of the September paper, “Mitigating the Impact of Pandemic Influenza Through Vaccine Innovation,” which warned of potentially catastrophic death tolls and economic damage from a pandemic flu in the United States.

“I accumulated all this knowledge, and then coronavirus came up,” Scherbina said in a telephone interview. “So I thought, I should put it to use.”

The 2019 White House study called for new federal efforts to speed up the time it takes to develop and deploy new vaccines.

It did not specifically predict the emergence of the coronavirus — instead, it modeled what would happen if the United States was hit with a pandemic influenza akin to the 1918 Spanish flu or the so-called swine flu of 2009.

It projected deaths and economic losses depending on how contagious and deadly the virus turned out to be.

At even the highest rates it modeled, the pandemic flu in the exercise was still less contagious and less deadly than epidemiologists now say the coronavirus could be in the United States.

The White House study estimated that a pandemic flu could kill up to half a million Americans and inflict as much as $3.8 trillion in damage on the economy.

Those estimates did not account for any economic loss incurred by “healthy people avoiding work out of fear they will be infected by co-workers.”

The study’s top-end damage estimate would have been even larger than $3.8 trillion, Scherbina said, but the final version of the paper was changed inside the Council of Economic Advisers to discount the economic value assigned to the lives of older Americans.

Council officials said today that Philipson was not available for an interview.

He gave no indication this year that the study and its predictions had influenced administration officials in their early response to the coronavirus outbreak.

Philipson, whose academic specialty is health economics, was the acting head of the council when the September report was published.

He told reporters in late February that the administration was taking a “wait and see” approach before it began any analysis of possible damage to the economy from the virus.

“If you look at the resilience of the economy to a public health threat,” he said, “certainly we have much bigger threats than the coronavirus.”

He went on to recite the number of deaths each year from a typical flu strain.

The study published the previous fall had warned against such a comparison.

“People may conflate the high expected costs of pandemic flu with the far more common, lower-cost seasonal flu,” the study said. “It is not surprising that people might underappreciate the economic and health risks posed by pandemic flu and not invest in ways to reduce these risks.”