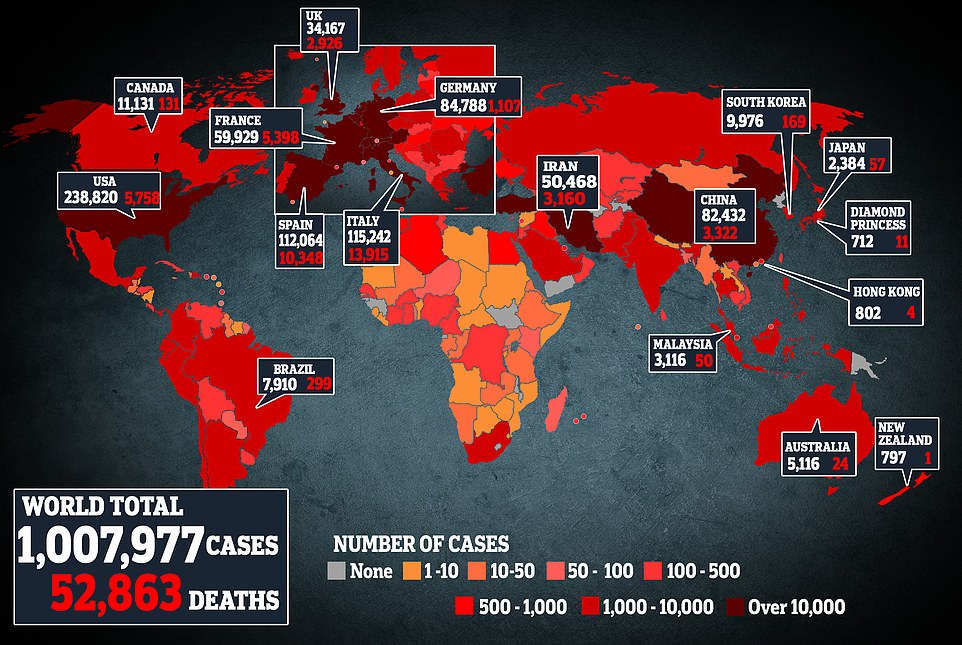 Global coronavirus cases have soared past one million as the pandemic explodes in the US and the death tolls continue to climb in Italy and Spain, according to a tally by Johns Hopkins University.

The deadly virus has killed more than 51,000 across the world, with the largest number of deaths in Italy, followed by Spain and the US.

Total cases reported by Thursday grew 10 percent from a day earlier, the first time the rate has hit double digits since the virus took hold outside China.

The global fatality rate is now over 5 per cent of all reported cases, with countries including the UK, the US and Spain reporting a spike in fatalities over recent days.

Around 22 percent of total cases have been reported by the US, while Italy and Spain have each reported 11 percent of global cases.

China, where the virus emerged in December, has reported 8 per cent of total cases globally as the epicentre of the pandemic moved to Europe and the US.

Europe together accounts for over half of cases and more than 70 per cent of deaths linked to the virus. Countries in Southern Europe with higher older age demographics have been hit particularly hard.

It comes as more than 3.9 billion people, or half of the world’s population, are now being called on to remain in their homes to combat COVID-19.

The measures – which include compulsory or recommended confinement, curfews and quarantines – are in place in more than 90 countries and territories.

The introduction of a curfew in Thailand, which takes effect on Friday, pushed the number past half of the global population of 7.8 billion.

Some 2.78 billion residents of 49 countries and territories are currently subject to obligatory confinement at home.

In Europe, the likes of Britain, France, Italy and Spain are under restrictions. In Asia, similar rules apply to India, Nepal and Sri Lanka among others.

Large parts of the US are under some kind of lockdown and even relatively isolated New Zealand has not been spared.

Although COVID-19 arrived in Africa later than other regions, countries as distant as Morocco and South Africa have begun to take action.

Eritrea joined the list on Thursday, ordering its citizens to remain in their homes for 21 days.

In most places, people are still able to get out of the house to make vital purchases, such as food or medicine or to go to work, though residents are encouraged to work from home if possible.

In at least 10 other countries, totalling 600 million people, governments are urging residents to stay at home, but without introducing any coercive measures such as fines or arrests.

This is the case in Germany, Canada, Mexico and Iran among others.

At least 26 other nations or territories, accounting for some 500 million inhabitants, have introduced curfews, obliging people to stay at home throughout the evening and night.

This method is much used in African countries including Kenya, Egypt and Mali and Latin American nations including Chile, Panama and Puerto Rico.

In at least seven countries, the governments have focused on the main population centres. Bans are now in place on anyone leaving or entering the Saudi Arabian cities of Riyadh, Medina and Mecca.

Finland has introduced similar rules for Helsinki and DR Congo for Kinshasa. These restrictions cover over 30 million residents.

According to figures released on Thursday, the pandemic has infected more than one million people around the world.

There have been at least 51,000 fatalities in 183 countries and territories, according to official sources. The US has the largest outbreak in the world with 143,055 confirmed virus patients, of whom 2,514 have died.

Italy has the unwanted lead in deaths, recording a death toll of 10,779 people out of 97,689 confirmed cases.

China, where the outbreak first emerged in December 2019, has officially registered 81,470 cases and 3,340 deaths.

Some 3.4billion people are now living under severe lockdown restrictions which would have been unthinkable in many democracies until a few weeks ago.