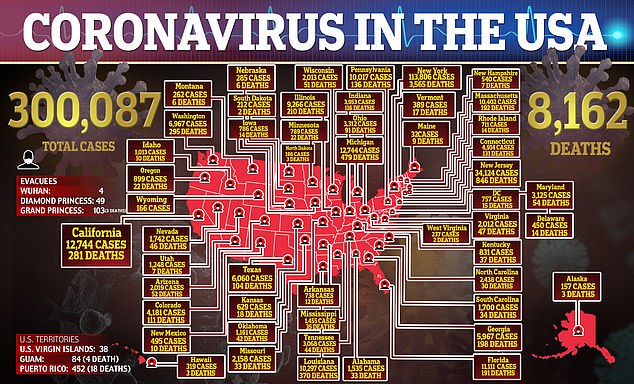 The number of coronavirus cases in the U.S. surpassed 300,000 today, an increase of more than 32,000 from the day before, as the pandemic continued to exact a grim toll on the nation.

New York City alone accounted for more than a quarter of the U.S. coronavirus deaths.

New York state recorded 630 deaths in the past 24 hours, the biggest one-day toll there yet, taking the total fatalities to 3,565.

‘It is like a fire spreading,’ New York Governor Andrew Cuomo, of the alarming spread of the virus from the New York City epicenter. ‘The fire, it doesn’t max out in one place, but it consumes where it is and it’s moving out.’

Michigan now has more cases than California, with 12,744 in Michigan and 12,603 in California.

Outside of New York City, Detroit is the metro area with the highest death toll, with 223 dead in Wayne County.

White House medical experts have forecast that between 100,000 to 240,000 Americans could be killed in the pandemic, even if sweeping orders to stay home are followed.

In New York City, hospitals and morgues are struggling to treat the desperately ill and bury the dead. 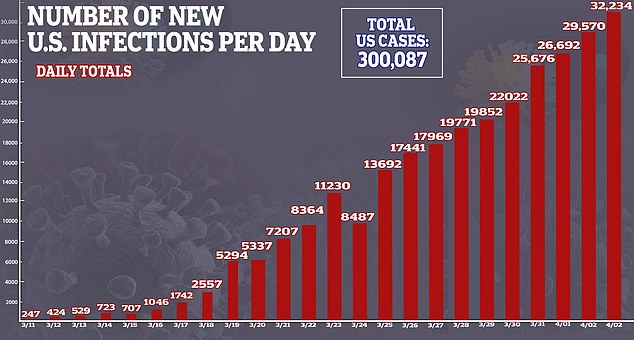 Crematories have extended their hours and burned bodies into the night, with corpses piling up so quickly that city officials were looking elsewhere in the state for temporary interment sites.

Because of the risk of infection, many people with critically ill relatives in New York City are unable to see their loved ones in their final hours.

A resident at New York-Presbyterian hospital said he and his colleagues have made several death notification phone calls every shift this week.

‘There’s something sort of unquantifiably painful about telling a family their loved one died without letting them see them,’ he said.

An emergency stockpile of medical equipment maintained by the U.S. government has nearly run out of protective garb for doctors and nurses.

Almost all Americans are under orders from state and local officials to stay home except for essential outings such as grocery shopping or seeing a doctor.

Arkansas, Iowa, Nebraska, North Dakota and South Dakota are now the only states that do not have either major city or statewide stay-at-home orders in place.

Areas of the country such as Florida and Texas that had been slow to lock down have started practicing social distancing and sheltering at home.

‘We see what’s going on in New York now, we see that people are dying,’ Rick Scott, a U.S. senator from Florida, told Fox News Channel.

‘People are beginning to understand that the best way that we can slow the spread and actually avoid death is by this stay-at-home standard, going out only for essential services,’ Texas governor Greg Abbott told the channel. He was among the last governors to issue a statewide order telling residents to avoid leaving their home.

There were still some hold-outs elsewhere, though.

‘We’re defying the rules because the commandment of God is to spread the Gospel,’ he told Reuters.

President Trump warned there will be many American deaths in the coming week in a somber start to his daily briefing on the coronavirus pandemic today at the White House.

Trump predicted that the coming week would be one of the ‘toughest’ weeks the country could face due to the spreading disease.