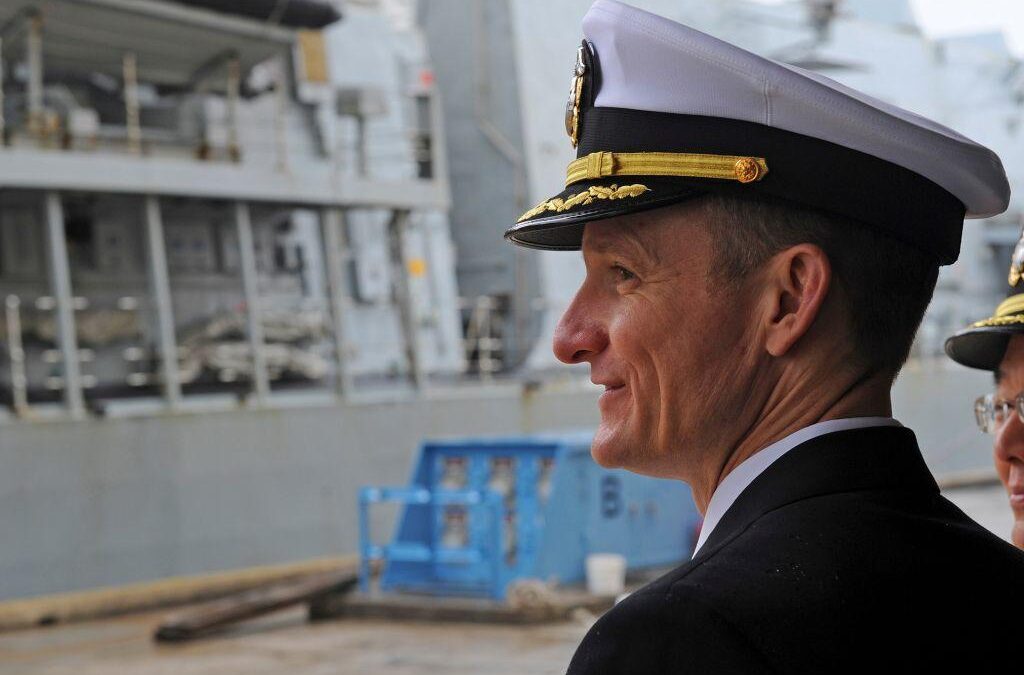 Capt. Brett E. Crozier, the Navy captain who was removed from command of the coronavirus-stricken aircraft carrier U.S.S. Theodore Roosevelt, has tested positive for Covid-19.

The commander began exhibiting symptoms before he was removed from the warship on Thursday, two of his classmates said.

Crozier was fired following a leak to The San Francisco Chronicle of a letter he had emailed to Navy leaders that detailed the failures on the service’s part to provide the necessary resources to swiftly move sailors off the carrier and disinfect areas on board as the virus spread through the ship.

Thomas Modly, the acting secretary of the Navy, said he had lost confidence in Crozier’s ability to command the ship effectively as it dealt with the evolving crisis after Crozier sent the letter on an unclassified email system to 20 to 30 people.

Sending such a letter, Modly said, caused unnecessary alarm about the operational readiness of the ship and undermined the chain of command. “In sending it out pretty broadly, he did not take care to ensure that it couldn’t be leaked,” Modly said. “And that’s part of his responsibility.”

A half-dozen former top Navy officials said today that Modly’s intervention was a mistake that they feared would have a chilling effect on commanders and encourage them to suppress bad news that might upset political leaders.

“I think the firing was a really bad decision, because it undermines the authority of the military commanders who are trying to take care of their troops, and significantly negatively impacts the willingness of commanders to speak truth to power,” said retired Adm. Mike Mullen, the former chairman of the Joint Chiefs of Staff.

Modly told a colleague on Wednesday he was thinking of relieving Crozier and that Trump “wants him fired.”

He was advised by several current and former colleagues, that such a dismissal would be unwise, and that the matter was best left to the military.

One retired four-star officer said he was worried about “undue command influence” by Modly.

The acting secretary had the authority to sack Crozier but in doing so undermined the uniformed officers who normally oversee such personnel decisions.

“This is much bigger than the CO of the Theodore Roosevelt,” he said. “We’ve been working for years to make our commanding officers feel free to speak out about problems.”

In a briefing Saturday, Trump offered support for Modly’s decision.

“He shouldn’t be talking that way in a letter,” Trump said of Crozier. “I thought it was terrible what he did.”

The news of Crozier’s diagnosis is likely to fuel further skepticism of the Navy’s handling of the outbreak aboard the aircraft carrier, which has already received notable criticism from the rank and file.

On Friday, videos circulated showing hundreds of sailors aboard the Roosevelt cheering for Crozier as he disembarked the ship.

Memes depicting the Navy captain rescuing his sailors from a burning building over saving his own career sprouted up across social media.

In a statement, the Democratic leaders of the House Armed Services Committee condemned his removal, although they acknowledged that Crozier might have made missteps in his handling of the situation.

“Captain Crozier was justifiably concerned about the health and safety of his crew, but he did not handle the immense pressure appropriately,” the lawmakers said. “However, relieving him of his command is an overreaction.”

“Throwing the commanding officer overboard without a thorough investigation is not going to solve the growing crisis aboard the U.S.S. Theodore Roosevelt,” the lawmakers added.

Former Vice President Joe Biden today expressed criticism of the Navy’s actions on ABC’s “This Week,” saying, “I think it’s close to criminal the way they’re dealing with this guy.”

“I think he should have a commendation rather than be fired,” Biden added.

A Navy spokesman said that Crozier has been reassigned to the headquarters of the Naval Air Forces Pacific command in San Diego, but that he must complete a quarantine period first.

The captain was being quarantined in “distinguished visitors quarters” on Naval Base Guam, according to two of his classmates. It is unclear when he was first tested for Covid-19 or when he received his results.

The U.S.S. Theodore Roosevelt, which is homeported in San Diego, arrived in the U.S. territory of Guam on March 27 and holds a crew of nearly 5,000 service members.

All sailors who are evacuated from the carrier must have a negative test result for Covid-19 before they can be quarantined ashore.

At least 400 from the vessel were expected to be sent to hotels in Guam toay, according to Mary Rhodes, the president of the Guam Hotel and Restaurant Association, who is helping the Navy with the logistics of these transfers.

“This is an emergent situation and a humanitarian effort,” said Rhodes. “We have 13 hotels to receive up to 4,000 military personnel.”

The sailors will join roughly 625 other service members from the Roosevelt who have already tested negative for the virus and have been sent to quarantine in hotels over the past few days.