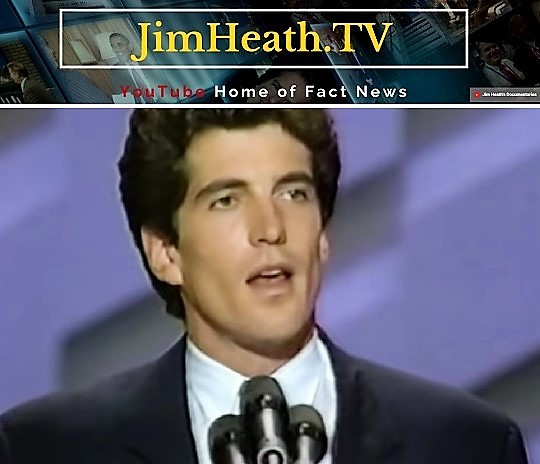 Every single day for months a video of a speech made by John F. Kennedy, Jr. posted on our YouTube page, JimHeathChannel, has been inundated with comments from the QAnon conspiracy crowd who believe he’s alive.

To make it clear: JFK Jr. is extremely, irrefutably dead.

In July 1999, the pulchritudinous son of John and Jackie Kennedy and cofounder of George magazine perished in a tragic plane crash at the age of 38, along with his wife Carolyn Bessette and his sister-in-law Lauren.

But the Q crowd have convinced themselves his death is only a conventional narrative perpetuated by the fake news media.

According to hundreds of comments now on our YouTube page, hardcore Q believers think that JFK Jr. is not only alive and well, but also that he plans to emerge from his 20-year hiatus from public life by coming out and supporting Donald Trump as his running mate this year.

Moreover, they believe that a guy in Pittsburgh named Vincent Fusca is actually JFK Jr. in disguise, and they have made T-shirts promoting this belief. (Seriously. You can buy them on Amazon.)

The theory that JFK Jr. is alive and a Trump supporter and a hirsute former financial services professional who lives in Pittsburgh has been percolating in QAnon forums for several years.

But that hasn’t slowed them down.

“He seems genuinely humble. It’s in his eyes. I can’t wait for him to say hallo (sp) to the world,” wrote Faith Mungai.

“If he really is alive and Trump introduces him live on stage soon, The world will literally have a collective 10.0 seismic mind meltdown,” added AE.

“He will before is soon …accepting the vice presidential nomination of the United States ..on the ticket with President Trump…Trump/Kennedy 2020,” wrote Gerry Foley in January. 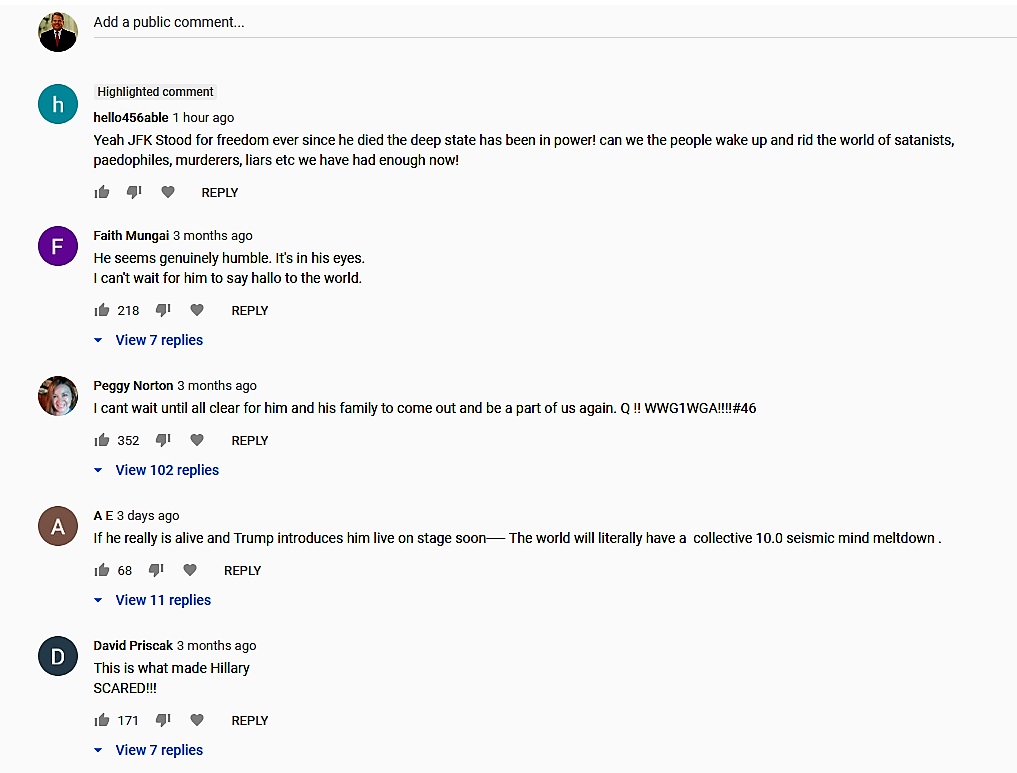 You can read all the comments by clicking on the video below:

So what is QAnon, exactly?

QAnon is an elaborate conspiracy theory suggesting that an anonymous poster known as “Q” (so named because of his supposed high level of security clearance in the U.S. government), has been posting messages since fall 2017 attesting to a “deep-state” conspiracy against Trump orchestrated by his enemies, including Hillary Clinton, John Podesta, and Barack Obama.

QAnon supporters believed that the Robert Mueller investigation was actually a front for an investigation into Trump’s enemies, who they believe are engaged in a number of criminal activities, including running a powerful global pedophile ring.

They eagerly await “the Storm,” or the moment when Q will reveal himself and Trump will arrest all of his enemies (including Oprah Winfrey) and send them to Guantanamo Bay.

How did JFK Jr. become involved?

The theory that Kennedy was alive and running Q arose in June 2018, after the anonymous poster behind Q briefly went dark.

Another anonymous poster, “R,” showed up on the QAnon forums on the website 8chan and started dropping hints that JFK Jr. had faked his death to avoid being targeted by members of the deep-state conspiracy and was actually Q.

The idea gained further credence thanks to Liz Crokin, a right-wing conspiracy theorist who referred to JFK Jr.’s role as Q during a 2018 interview with vlogger Jenny Moonstone.

In the video, Crokin cited Q’s posts about former President John F. Kennedy as evidence that JFK Jr. was running the account.

“The way that Q talks about JFK Sr. in the posts, it is with such love and passion, it makes me think that it is someone that is close to him,” Crokin said in the video. “If JFK Jr. faked his death and was alive, it would make sense that he was Q.”

Adding fuel to the fire, a quote attributed to JFK Jr. in praise of Trump was widely shared by QAnon supporters on social media.

“If my dear friend Donald Trump ever decided to sacrifice his fabulous billionaire lifestyle to become president he would be an unstoppable force for ultimate justice that Democrats and Republicans alike would celebrate,” the quote, which was reportedly published in George Magazine in June 1999, read. (Kennedy’s fatal plane crash was on July 16, 1999.)

This statement was not published in the June 1999 issue of George magazine, nor was it ever made by John F. Kennedy, Jr.

Not wanting to let a silly thing like facts get in the way, QAnon supporters clung to the theory that Kennedy and Trump had long been in cahoots, and the quote continues to circulate to this day, as does another “quote” from JFK Jr. reportedly vowing to avenge his father’s death, “even if I have to bring down the whole government.”

There is no record of JFK Jr. ever making the comment,

Who is Vincent Fusca, and how did he become involved?

Described by Sommer as a “fedora-wearing Trump superfan from Pennsylvania,” Fusca is a frequent attendee at Trump rallies and is sometimes seen in the background of photos of Trump during his speeches. (He also placed 1572nd in the 59th World Series of Poker, according to an online WSOP profile under his name.)

Some QAnon supporters have pointed to Fusca’s presence at Trump rallies as proof that Fusca is actually JFK Jr. in disguise, and has altered his appearance with veneers and plastic surgery in order to pass through society undetected. (It is worth noting that the two look absolutely nothing alike.)

As a result of this theory, Fusca has become something of a mega-celebrity in QAnon world, posing for photos with fans and fueling the theory with his own cryptic tweets; at one point, a Twitter account claiming to be Fusca posing as “the Real RAnon” had more than 30,000 followers. (The account was later revealed to be authored not by Fusca, but by a former Arizona Green Party congressional candidate named Ray Parrish.)