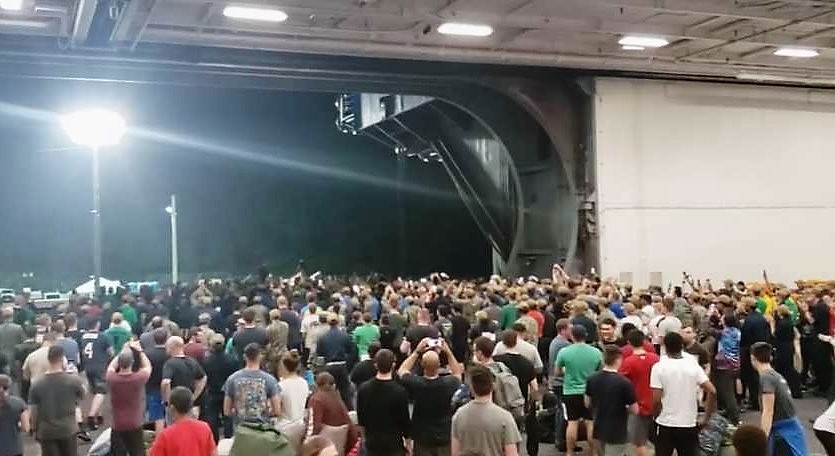 A massive crowd of sailors aboard the USS Theodore Roosevelt threw coronavirus-related caution to the wind to send off their captain — standing by their former commander after he was abruptly relieved of his duties.

Capt. Brett Crozier — the ship captain who was reassigned because the Navy said he broke protocol by alerting higher-ups about a coronavirus outbreak on his vessel — received a prideful, raucous farewell this morning, footage of his exit posted on social media shows.

Hundreds of service members ignored social distancing protocol and packed the hangar deck of the Roosevelt to pay tribute to their erstwhile leader, a day after he was ousted by top Navy brass.

The decision clearly wasn’t water under the bridge for the large crowd of sailors, as they signaled their opposition to Crozier’s superiors who made the decision to send him packing to dry land.

“That’s how you send off one of the greatest captains you ever had!” a man can be heard in another video proudly proclaiming. “The GOAT! The man for the people!”

The dramatic farewell to the commander comes after Acting Navy Secretary Thomas Modly announced Thursday that Crozier would be relieved of command, though he will remain in the Navy.

Captain Brett Crozier departing his ship for the final time.

Every Sailor remaining on the USS Theodore Roosevelt came to send him off with cheers and chants, full of admiration.

This man fell on his sword to protect the crew. He is an American hero.pic.twitter.com/gOhK7mkp7i

The concerned captain drew the ire of his superiors when on March 30 he sent a memo requesting that they allow him to offload sailors who had been infected with COVID-19.

“We are not at war. Sailors do not need to die,” wrote the then-commander of the USS Theodore Roosevelt. “If we do not act now, we are failing to properly take care of our most trusted asset — our sailors.”

In response, Modly claimed Crozier sent an unsecured classified email to a “broad array of people,” in violation of Navy guidelines.

In doing so, Modly said, the captain “unnecessarily raised the alarm of the families of our sailors and Marines with no plans to address those concerns.”

More than 100 people on the ship, which is now docked in Guam, had tested positive for the deadly virus as of Thursday, The Wall Street Journal reported.