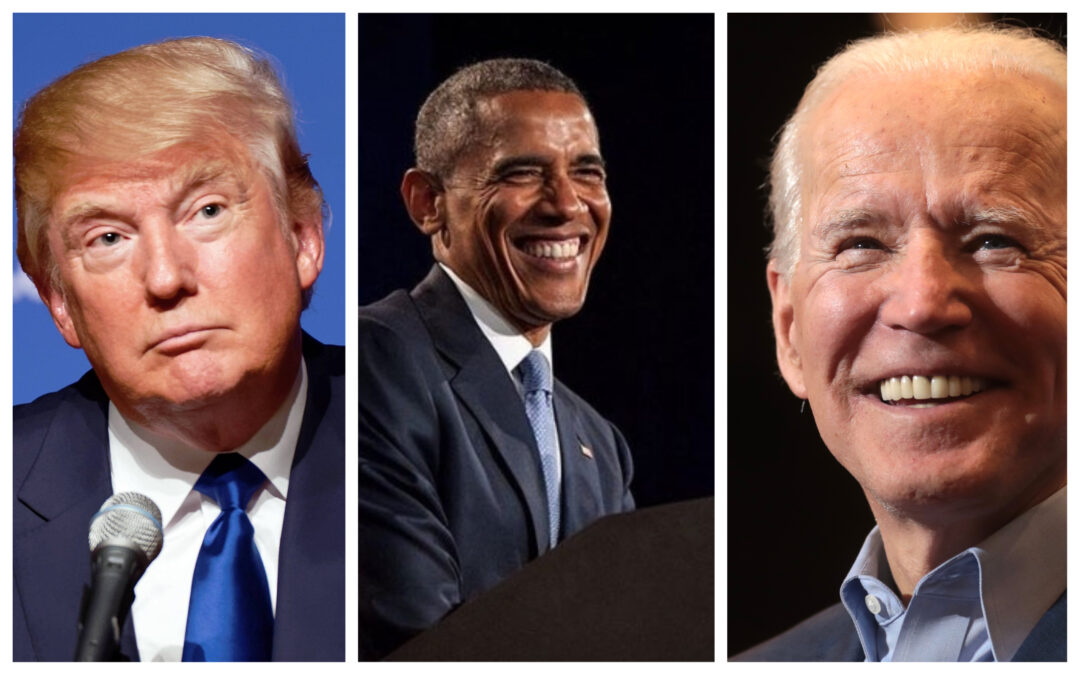 Trump, down in the polls, followed up with a tweet insisting he was elected due to his predecessor’s ‘corrupt’ administration.

‘It was the greatest political crime in the history of our country,’ Trump said of Obama and Biden, the presumed Democratic nominee.

‘If I were a Democrat instead of a Republican, I think everybody would have been in jail a long time ago, and I’m talking with 50 year sentences,’ the president continued in an interview with Fox Business’ Maria Bartiromo that aired Sunday. ‘It is a disgrace what’s happened this is the greatest political scam, hoax in the history of our country. And people should be going to jail for this stuff and hopefully, a lot of people are going to have to pay.’

Biden and Obama reportedly knew about the FBI seeking an investigation into the incoming National Security adviser, and then-administration purportedly requested to ‘unmask’ the identity of Flynn.

There is nothing unusual about unmasking, it is not illegal, and Trump’s own administration has done it repeatedly.

Trump lauded the case being dropped against General Flynn, who had already pleaded guilty under oath, and the president called him a ‘hero’ for dealing with the charges.

‘This was all Obama. This was all Biden. These people were corrupt – the whole thing was corrupt, and we caught them,’ Trump said.

Trump’s remarks came as Obama lashed out at him again on Saturday during a virtual commencement speech for graduating high school students.

Obama has remained largely silent in the past on Trump’s actions as president, only issuing veiled indications of disapproval.

In the hour-long televised special, Obama panned ‘so-called grown-ups, including some with fancy titles and important jobs’ who do ‘what feels good, what’s convenient, what’s easy.’

‘That’s how little kids think, which is why things are so screwed up,’ the 44th President continued, and while he did not mention Trump by name, there was no mistaking who he meant.

But Trump insisted as he returned to the White House from a working weekend at Camp David that he had not heard the comments from Obama’s commencement address.

When the reporter tried to describe what the comments were, Trump dismissed Obama as ‘incompetent.’

‘Look, he was an incompetent president That’s all I can say. Grossly incompetent,’ he asserted.

During a wide-range interview with Sunday Morning Futures, Trump also said he watched Biden’s response to the allegations that he knew about the investigation and intent to prosecute during his interview with ABC News’ George Stephenopoulos.

‘I watched Biden yesterday – could barely speak,’ Trump criticized of his presumed 2020 Democratic opponent. ‘And he said he didn’t know anything about it and now, it just gets released right after he said that – it gets released he was one of the unmaskers meaning he knew everything about it.’

‘So he lied to your friend George Stephanopoulos,’ Trump charged.

Biden has said the FBI briefed him and Obama in early January 2017 – before Trump was sworn in– that they were seeking an investigation into Flynn.

Biden asserted, however, that he didn’t know anything else about the case, including that they intended to prosecute Flynn.

‘I was aware that there was – that they asked for an investigation, but that’s all I know about it,’ Biden said Tuesday morning. ‘And I don’t think anything else – look, think about this: Can you image any other President of the United States focusing on this at the moment when a country is just absolutely concerned about their health?’

‘This is all about diverting attention,’ he insisted. ‘Focus on what’s in front of us. Get us out of this, Mr. President.’

Trump has become increasingly frustrated in recent days as his own internal polling shows him losing to Biden in critical battleground states, including must-win Florida.