‘Jane Roe’ From ‘Roe Vs. Wade’ Was PAID To Change Position On Abortion 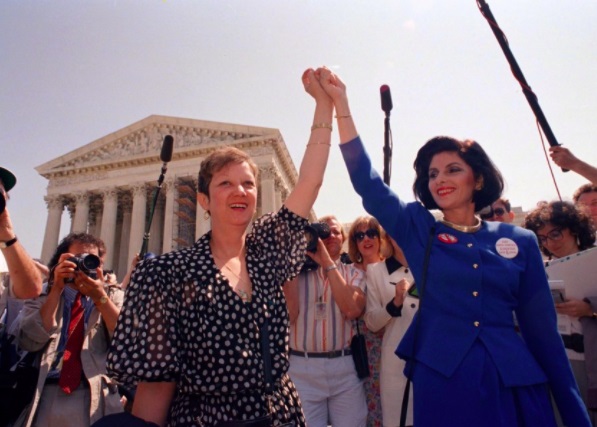 Norma McCorvey, remembered as ‘Jane Roe’ in the famous Supreme Court case, died in February 2017, but in the final scenes of a new documentary, she reveals she still has something to say.

In her “deathbed confession,” McCorvey shares that her stint as an anti-abortion activist was a facade.

When asked if the anti-abortion movement used her as a trophy, McCorvey responds, “Of course.”

“I think it was a mutual thing,” she says. “I took their money, and they put me out in front of the cameras and told me what to say, and that’s what I’d say…I did it well, too. I am a good actress. Of course, I’m not acting now.”

Arriving in an election year as the Supreme Court is considering a high-profile abortion case with the potential to undermine Roe vs. Wade and several states across the country have imposed so-called “heartbeat laws” effectively banning the procedure, “AKA Jane Roe” is likely to provoke strong emotions on both sides of this perennial front in the culture wars.

Director Nick Sweeney says his goal was not necessarily to stir controversy, but to create a fully realized portrait of a flawed, fascinating woman who changed the course of American history but felt she was used as a pawn by both sides in the debate.

“The focus of the film is Norma. That’s what I really want people to take away from the film — who is this enigmatic person at the center of this very divisive issue,” he says. “With an issue like this there can be a temptation for different players to reduce ‘Jane Roe’ to en emblem or a trophy, and behind that is a real person with a real story. Norma was incredibly complex.”

At first, he says, she was reticent, “but when she realized when I was not involved in the abortion debate she was very happy to open up.”

Over the course of the time they spent together, McCorvey recounted details of her difficult upbringing — marked by abuse, neglect and a stint in reform school — turbulent personal life, including a short-lived teenage marriage, and a decades-long relationship with girlfriend Connie Gonzalez.

“I thought she was extremely interesting and enigmatic. I liked that her life was full of these fascinating contradictions,” says Sweeney, who also interviewed figures on either side of the abortion issue who were close to McCorvey, including attorney Gloria Allred and Rob Schenck, an evangelical minister and former leader of Operation Rescue.

McCorvey comes across as funny, sharp and unfiltered, with a broad performative streak.

She rattles off lines from “Macbeth” and jokes, “I’m a very glamorous person — I can’t help it, it’s a gift.”

The documentary includes scenes of McCorvey on election night 2016 — a few months before she died of heart failure at age 69 — expressing her support for Hillary Clinton.

“I wish I knew how many abortions Donald Trump was responsible for,” McCorvey muses. “I’m sure he’s lost count, if he can count that high.”

“She had a kind of sly wit,” says Sweeney, recalling the many hours he spent with her in Katy, going on doughnut runs or sitting in a park, where she’d make him pick magnolia flowers.

But there is also great sadness, particularly surrounding her relationship with Gonzalez, which she renounced after her conversion in 1995.

The film explores one of the great ironies of McCorvey’s life story: Although she helped make abortion legal, McCorvey herself never had an abortion.

She was pregnant with her third child when, in 1970, she signed an affidavit challenging laws in Texas which prohibited abortions except to save a mother’s life.

As an impoverished, uneducated woman lacking the means to travel out of state or obtain an illegal procedure, she was an ideal plaintiff for the lawyers who tried the case, Sarah Weddington and Linda Coffee.

“I know how I felt when I found out that I was pregnant and I wasn’t going to let another woman feel that way — cheap, dirty and no good,” McCorvey says in the film. “Women make mistakes, and they make mistakes with men, and things happen. It’s just Mother Nature at work. You can’t stop it. You can’t explain it. It’s just something that happens.”

McCorvey remembers learning of the decision in the newspaper and receiving a phone call from Weddington saying they’d won. “Why would I be excited? I had a baby, but I gave her away. It’s for all the women who come after me.”

“AKA Jane Roe” also shows how McCorvey was held at arm’s length by abortion rights proponents.

After a decade of anonymity, McCorvey went public in the 1980s and began granting interviews, and was depicted in the Emmy-winning TV movie, “Roe vs. Wade,” starring Holly Hunter.

But to the leaders of the abortion rights movement, the inconsistencies in her story — for a time McCorvey claimed she had gotten pregnant as the result of a rape, then said she had been lying — and lack of polish made her a less-than-ideal poster girl for the cause.

In 1995, she was working at a Dallas abortion clinic that was targeted for demonstrations by Operation Rescue, a militant organization known for extreme tactics such as blockading clinics (the group is now known as Operation Save America).

She struck up an unlikely friendship with Flip Benham, an evangelical minister, who baptized her in a backyard pool, and for the next two decades of her life was a fixture at antiabortion protests and in documentaries.

In 1998, she published a second memoir, “Won by Love,” detailing her change of heart on abortion.

As Benham recalls with evident pride in “AKA Jane Roe,” McCorvey also took part in demonstrations where he burned the LGBT flag and the Quran.

Despite her visible role in the fight against abortion, McCorvey says she was a mercenary, not a true believer.

And Schenck, who has also distanced himself from the antiabortion movement, at least particularly corroborates the allegations, saying that she was paid out of concern “that she would go back to the other side,” he says in the film.

“There were times I wondered: Is she playing us? And what I didn’t have the guts to say was, because I know damn well we were playing her.”

Schenck expresses regret at targeting McCorvey, someone whose vulnerabilities could be easily exploited, he says.

“What we did with Norma was highly unethical. The jig is up.”