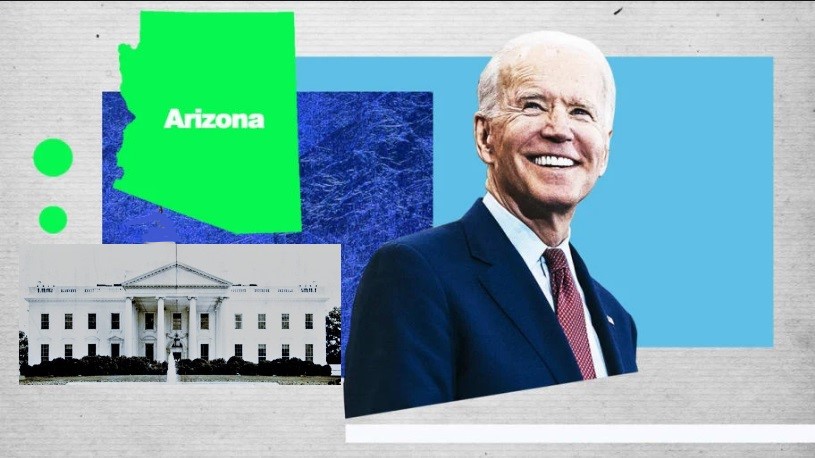 Joe Biden is leading President Trump by a margin of 9 points in traditionally-conservative Arizona, according to a new poll released today, an early sign that Democrats may have a shot at winning the key state that hasn’t voted for a Democratic presidential candidate since 1996.

The poll, conducted by the GOP-leaning OH Predictive Insights, shows Biden leading Trump by 9 points, 52%-43%, and is the sixth poll showing the former vice president ahead in the state since the beginning of March, according to a RealClearPolitics polling tracker.

Tied to the White House for weeks because of the coronavirus, Trump landed in Arizona today, his most extensive trip since the start of the pandemic.

Trump toured a Honeywell aerospace facility in Phoenix that makes respirator masks, and indicated he sampled their product.

Vice President Mike Pence was criticized last week for not wearing a mask during a tour of the Mayo Clinic in Minnesota.

Trump arrived in Arizona amid reports that he plans to slow down the task force he created to fight the pandemic.

The New York Times reported that Trump officials are “telling members and staff of the coronavirus task force that the White House plans to wind down the operation in coming weeks despite growing evidence that the crisis is raging on.”

Early signs point to Biden running neck and neck with Trump in states that swept the president to the White House in 2016, including Wisconsin, Pennsylvania, and Michigan.

If Biden can lock down Arizona, though, the Electoral College map looks much more favorable for him, as polling analysts point out he could lose a battleground state such as Wisconsin and still win the White House by also picking up Pennsylvania and Michigan.

“An Arizona victory for Biden would indicate a huge blue wave across the country, that would also probably result in Democrats recapturing the senate,” said Jim Heath. “If Arizona tilts blue, you could see other must-win GOP states like North Carolina and Georgia in play. That would be a nightmare for Trump on election night.”

Trump said he wants to resume reelection campaign rallies as soon as possible.