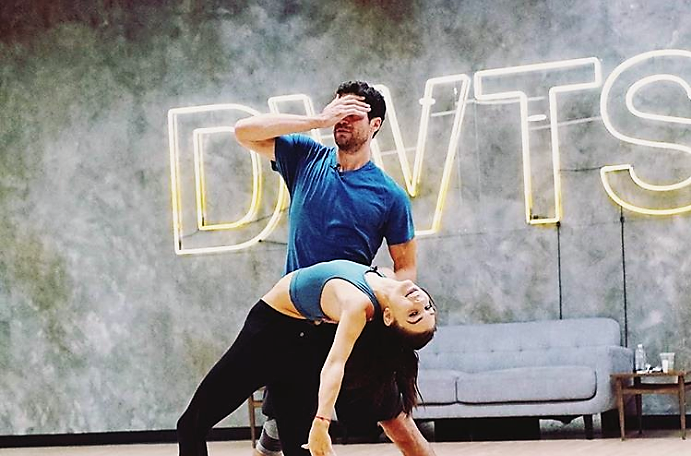 With zero rhythm and dance moves made for a fraternity party, “Grocery Store” Joe Amabile could finally meet his fate on a near future Dancing with the Stars.

At the end of week 5’s live episode, co-hosts Tom Bergeron and Erin Andrews shocked viewers with news that two extremely good dance couples — DeMarcus Ware and Lindsay Arnold, and Alexis Ren and Alan Bersten — were the bottom two in scores and that were in jeopardy of elimination.

DeMarcus Ware and Lindsay Arnold, and Alexis Ren and Alan Bersten react to being in the bottom two couples.

Then Bergeron, much to the relief of the audience and fans, announced no one was leaving, setting up a possible double elimination week in the near future.

With Amabile’s judges scores ridiculously low, and making up half the vote, that could drop him, finally, to the bottom of the pack.

Professional dancer Jenna Johnson is doing her best with the good looking reality TV star, but at the end of the day, it is a dance competition, and no smile in the world can cover up the fact that Amabile cannot dance.

Carrie Ann Inaba, Bruno Tonioli, and Len Goodman each said Amabile is slowing improving, but his scores remain significantly lower than the other contestants.

Last week, Amabile watched as Tinashe, and pro partner Brandon Armstrong, walked off the stage for the last time. That was considered a travesty, considering she was a far superior dancer.

Joe Amabile, with reality TV buddy Jordan Kimball, performed some ridiculous dance moves last week that made it appear they were at a drunken fraternity party.

You can only imagine what the reaction would have been had Grocery Store Joe knocked off either Ware or Ren this week.

Two weeks of extremely low judges scores (32 of 60) should offset whatever fan votes Amabile has accumulated.

As we discussed previously, the original British version of Dancing with the Stars features a dance off at the end of each show.

That system almost ensures that the “grocery store Joe’s” of the world do not get confused with actual dancers – which is the point of the show.

NOTE: There was one truly unforgettable moment on Monday’s show.

Andrea Bocelli and his son Matteo performed their new duet, Fall on Me, from Disney’s upcoming motion picture, The Nutcracker and the Four Realms.

It was a truly beautiful moment.