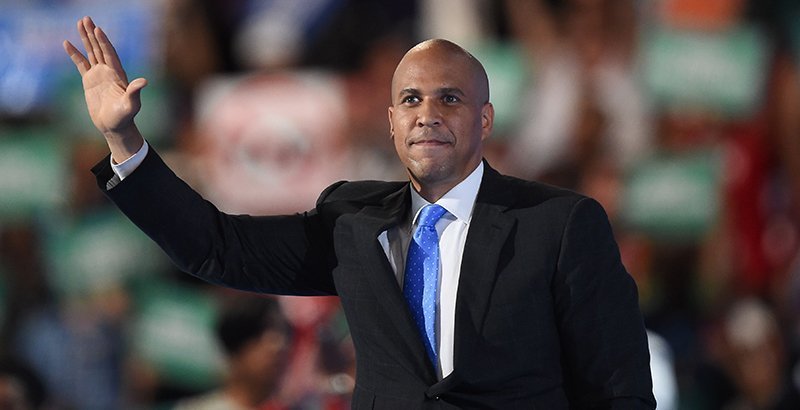 Sen. Cory Booker, a New Jersey Democrat who rose to prominence as Newark’s charismatic and ambitious mayor, announced today that he is running for president.

Booker chose the first day of Black History Month to launch his campaign, timing that nods to Booker’s own heritage and suggests he will put it at the center of his pitch to voters.

“The history of our nation is defined by collective action; by interwoven destinies of slaves and abolitionists; of those born here and those who chose America as home; of those who took up arms to defend our country, and those who linked arms to challenge and change it,” Booker narrates in a video released this morning, which features him walking through his Newark neighborhood.

I’m running for president. Join me on this journey. https://t.co/fEDqOVIfwh pic.twitter.com/h1FTPUYRzo

Booker joins a crowded and growing Democratic field that is already the most diverse in history — with multiple women, one gay candidate, a Latino and, with Booker now in the mix, two black candidates.

His announcement comes nearly a year to the day from the Iowa caucuses and the start of the primary calendar.

Booker plans to head to Iowa February 8-9 and then to South Carolina on February 10.

Booker is one of several senators running for president or seriously considering it.

At 49, he is the youngest among his Senate colleagues in the race.

His age is not all that sets him apart: Booker is unmarried and vegan, two unique qualities among the emerging Democratic field.

In his announcement video, Booker also notes that he is “the only senator who goes home to a low-income, inner city community” in Newark, “the first community that took a chance on me.”

In the Senate, Booker has at times favored a pragmatic approach, teaming up with like-minded Republicans on issues like criminal justice.

But he has also emerged as a passionate interrogator of President Donald Trump’s nominees — including Justice Brett Kavanaugh, at whose confirmation hearing Booker memorably unloaded in a heated “Spartacus moment.”

Public polling suggests Booker is unknown to many Americans.

But in a field where there is no clear front-runner, he brings a raw political talent that some Democrats believe could set him apart and make him a powerful contender.

The campaign message of Booker, who’s a gifted orator on the stump, will center on his signature themes of finding “common purpose” and a bringing about a “revival of civic grace” in American society, drawing a stark, if implicit, contrast with President Donald Trump’s harsh rhetoric.

While Booker has been reluctant to attack Trump directly, not wanting to emulate his tactics, Trump has not hesitated to target the senator — saying during a White House event in October that Booker “ran Newark, New Jersey, into the ground.”

As a senator, Booker has sought to sand off some of his rough political edges ahead of 2020, burnishing his progressive credentials by signing on to policies such as “Medicare-for-all.”

Last year, he announced he would no longer accept corporate PAC money; some progressives have been skeptical of Booker for the support he has received from Wall Street donors. Booker will also oppose super PACS supporting his candidacy or others.

Reflecting its central place in Booker’s story, Newark will be the headquarters for his campaign.

Logistically, that home base will offer the candidate and his team easy access to the power hubs of Washington and New York, plus proximity to three major airports to facilitate travel to key primary states and fundraising hotspots around the country.

Born in 1969 in Washington, Booker enjoyed a comfortable upbringing in the post-civil rights era, a lot he ascribes to a “conspiracy of love” that enabled his parents to break barriers.

Booker attended Stanford as a star football recruit, playing for four years but, by his own admission, never breaking through at the college level.

Booker’s interests were broad, however: He also served as student body president and ran a crisis hotline for students.

He would go on to attend Oxford as a Rhodes Scholar and later graduate from Yale Law School.