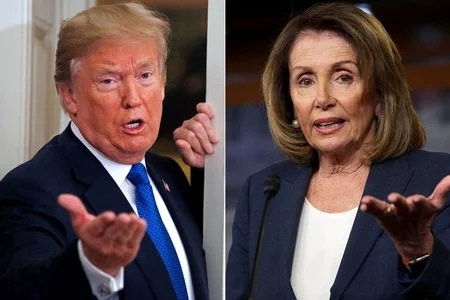 President Trump slammed Speaker Nancy Pelosi and Senate Democratic Leader Chuck Schumer as ‘Crazy Nancy’ and ‘Crying Chuck’ today as he turned to staff members requesting they confirm that he isn’t losing it.

‘You had the group – Crying Chuck and Crazy Nancy,’ Trump said of gathering.

‘I’ll tell you what, I’ve been watching her, and I have been watching her for a long period of time, she’s not the same person. She’s lost it,’ Trump said at an event with farmers and the ranchers at the White House. ‘I think she’s got a lot of problems.’

He repeatedly insulted the speaker.

‘She was all crazy yesterday,’ he said. ‘She is a mess. Let’s face it she doesn’t understand. They sort of feel like she’s disintegrating before their eyes.’

But Trump also argued he hasn’t changed since becoming president and repeated a description of himself he has used previously – ‘stable genius.’

‘I haven’t changed very much. Been very consistent. I am an extremely stable genius,’ he said as the farmers and ranchers stood silently and looked on

The remarkable dialogue was yet another step in the deteriorating relations between the White House and Democrats on Capitol Hill.

The past 48 hours have been filled with sniping, insults and name calling by both sides of the aisle, with the war of words getting increasingly personal and underneath the other’s skin.

The president has been in spin mode since he walked out of Wednesday’s White House meeting on infrastructure – an event where Pelosi said he acted like a ‘baby’ and Schumer said he had a ‘temper tantrum.’

Trump has repeatedly argued he was calm.

‘I would say calm as I was at the news conference,’ Trump said of his behavior.

He charged Democrats with playing politics and attacking him to harm his chances for re-election.

‘Their whole focus is on 2020 and trying to demean the Republican Party and demean the president of the United States as much as possible so either that we get his poll numbers down to the point he can’t win,’ Trump said, ‘or they want to try to get him out of office anyway we can.’

He complained: ‘The whole Democrat Party is very messed up. They have never recovered from the great election of 2016.’

He even compared Pelosi to presidential candidates Bernie Sanders and Beto O’Rourke.

‘I don’t want to say, ‘crazy Nancy’ because if I say that you’re going to say it’s a copy of ‘crazy Bernie’ and that’s no good. Because Bernie is definitely crazy,’ he said.

In a remarkable move, he also asked some of the White House staff – including Counselor to the President Kellyanne Conway, director of strategic communications Mercedes Schlapp, economic adviser Larry Kudlow, and press secretary Sarah Sanders – to vouch for his temperament.

‘Very calm – I’ve seen both and this was definitely not angry or ranting,’ Sanders said.

‘Calmer than some of our trade meetings,’ Kudlow joked.

Pelosi responded to the president’s tirade against her via Trump’s favorite medium – Twitter:

When the “extremely stable genius” starts acting more presidential, I’ll be happy to work with him on infrastructure, trade and other issues. https://t.co/tfWVkj9CLT