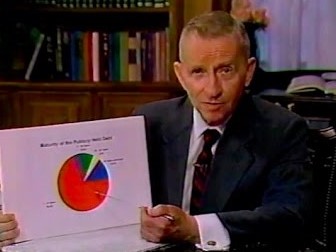 Ross Perot, the wiry Texas gadfly who made a fortune in computer services, amazed the nation with audacious paramilitary missions to Vietnam and Iran, and ran for president in 1992 and 1996 with populist talk of restoring Norman Rockwell’s America, died today at his home in Dallas.

The cause of his death was leukemia. He was 89.

In 1979 Perot staged a commando raid that he asserted had freed two of his employees, and thousands of criminals and political prisoners, from captivity in revolutionary Iran.

And in 1992 he became one of the most unlikely candidates ever to run for president.

He had never held public office, and he seemed all wrong, like a cartoon character sprung to life: an elfin 5 feet 6 inches and 144 pounds, with a 1950s crew cut; a squeaky, nasal country-boy twang; and ears that stuck out like Alfred E. Neuman’s on a Mad magazine cover.

Stiff-necked, cantankerous, impetuous, often sentimental, he was given to homespun epigrams: “If you see a snake, just kill it. Don’t appoint a committee on snakes.”

Under the banner “United We Stand America,” he spent $65 million of his billions in a campaign that featured innovative half-hour infomercials about himself and his ideas.

They were popular, with ratings that sometimes surpassed those of prime-time sitcoms. Ignoring negative newspaper and magazine articles, he laid siege to radio and television talk shows.

Switchboards lit up with calls from people wanting to volunteer. 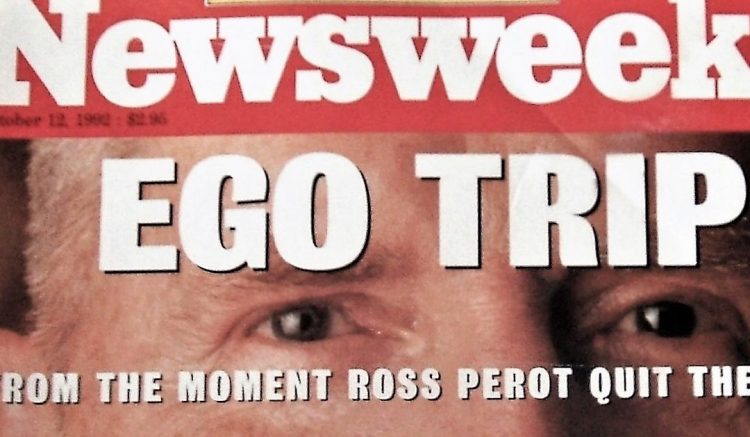 Before long, millions were responding to his calls to cut government deficits, red tape and waste, to begin rebuilding the crumbling cities and to restore his vision of America: the small-town life idealized in Rockwell’s homey portraits of ballpark patriotism, barbershop wisdom and flag-draped Main Street, a world away from corrupt Washington.

While Perot had done business with every administration since Lyndon B. Johnson’s, the federal government was one of his favorite targets.

Washington, he told its own denizens, “has become a town with sound bites, shell games, handlers, media stuntmen who posture, create images, talk, shoot off Roman candles, but don’t ever accomplish anything. We need deeds, not words, in this city.”

Improbably, he surged in the polls while the Republican incumbent, George Bush, and the Democrat, Bill Clinton, trained their fire on each other.

Polls showed that Perot’s support came from across the spectrum, from Democrats and Republicans, conservatives and liberals, mostly from the middle class.

Citizen drives got him on the ballot in all 50 states.

But at the peak of his popularity, he unexpectedly dropped out of the race.

Months later, he jumped back in, saying his withdrawal had been prompted by Republican “dirty tricks” to sabotage his daughter’s wedding with faked compromising photographs.

He did surprisingly well in three presidential debates, often mocking the “gridlock” in Washington. 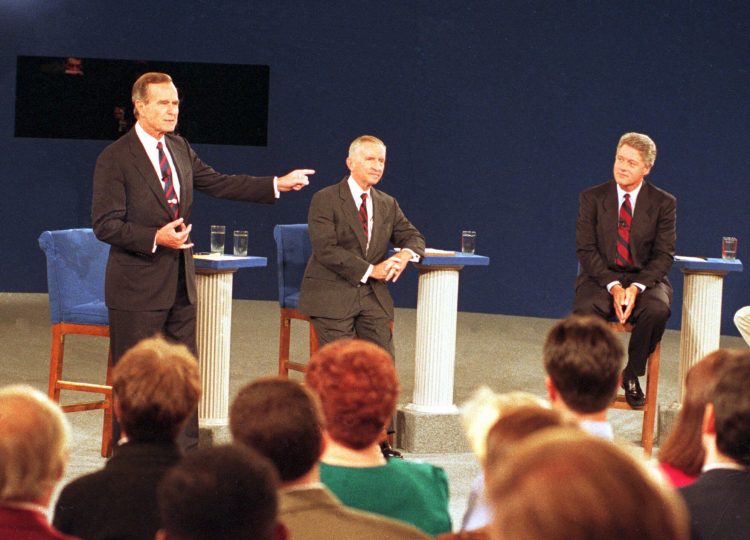 “It’s not the Republicans’ fault, of course, and it’s not the Democrats’ fault,” he said in the second round. “Somewhere out there there’s an extraterrestrial that’s doing this to us, I guess.”

On Election Day, Perot finished with 19 percent of the popular vote — almost 20 million ballots — compared with 38 percent for Mr. Bush and 43 percent for Mr. Clinton. It was the strongest third-party showing since Theodore Roosevelt’s Bull Moose run in 1912.

[Vote Your Conscience Was Perot’s Slogan]

It also led to claims by some Republicans, including the president’s son and future president George W. Bush, that Perot’s candidacy had cost President Bush a second term — a contention refuted by many political analysts, who pointed to, among other things, exit polls showing that Perot’s strength had not come disproportionately from defecting Republicans.

In 1996, Perot ran again, this time on the new Reform Party ticket, but he fared poorly.

By then the epigrams had paled, and voters suspected that his business strengths, the risk-taking and stubborn autocratic personality, might not serve a president constrained by Congress and public opinion.

And by then more was known of Perot, who could be thin-skinned and meanspirited, who had subjected employees to moral codes and lie detector tests, who was drawn to conspiracy theories and had hired private detectives to chase his suspicions.

His candidacy was crippled when a commission refused to let him join debates between President Clinton and the Republican nominee, Senator Bob Dole, on the grounds that he did not have a realistic chance of being elected.

He won only 8 percent of the vote.

But, as he liked to say, “Failures are like skinned knees: painful but superficial.”