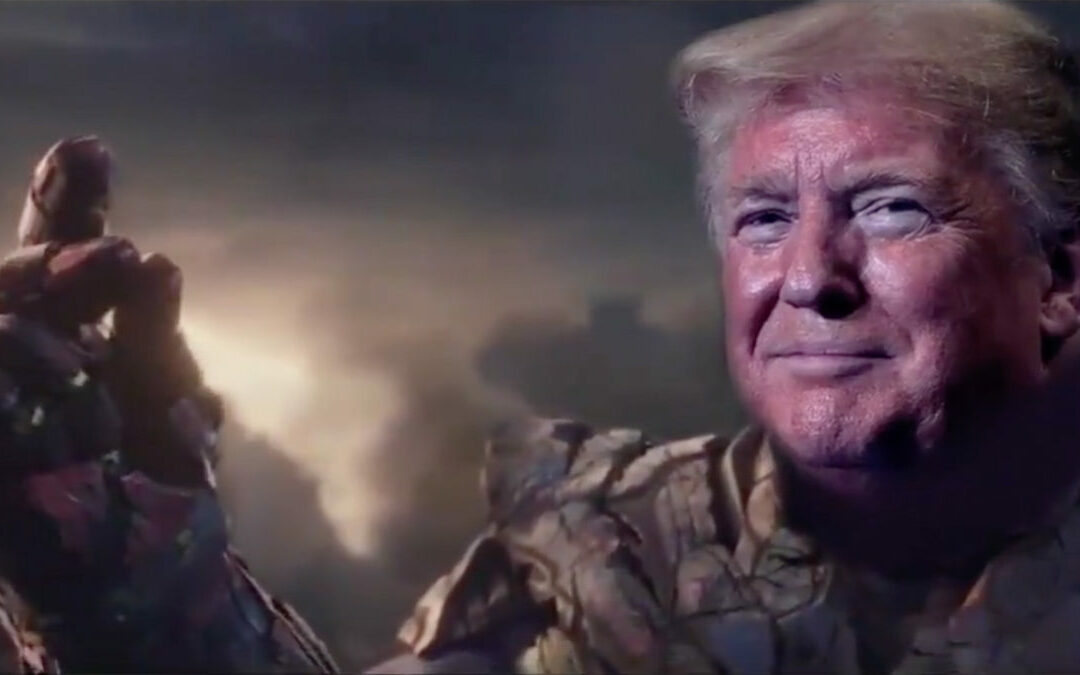 You just can’t make this stuff up.

Thanos, for the unfamiliar, is the main antagonist of Avengers: Infinity War and Avengers: Endgame.

His goal is to collect all of the Infinity Stones, because once he does he can snap his fingers and wipe out half the population of the entire universe.

He is the ultimate in evil.

In Avengers: Endgame, his fate is… well, the general fate of most comic book bad guys.

The Trump War Room Twitter account shared the video depicting POTUS as Thanos from Endgame in which the villain, thinking he’s finally won, declares, “I am inevitable.”

Trump/Thanos snaps his fingers and the Democratic leadership is completely wiped out.

House Democrats can push their sham impeachment all they want.

If you haven’t seen Endgame and are wondering how the scene plays out, Thanos’ snap doesn’t work.

Numerous people pointed out that in context, the line “I am inevitable” directly precedes Thanos’s defeat after an attempt at repeating the finger-snap is unsuccessful in “Endgame.”

Y’all know Thanos said that before he lost, right? https://t.co/hhDj51yzyj

Did you watch the movie??? This is the snap that doesn’t work because Iron Man stole the Infinity Stones moments before. https://t.co/Ot52aiB0yR

So you’re arguing that Trump is Thanos (“The Mad Titan”) who wants to kill half of all living things, but in the end winds up defeated and dying, taking all of his sycophantic followers down with him?

Trump’s team is presenting him as a narcissistic child-abusing villain intent on wiping out half of all life, AND picked the moment right before Thanos was defeated. #TheBestPeople https://t.co/mNtVGL1Wqa

You know… the villain who wants to MURDER HALF THE UNIVERSE.

And depicts him killing the Democrats. https://t.co/xoUjscFZR9

They know Thanos is the bad guy, right? pic.twitter.com/TMcQ17QTW5

Ronald Reagan liked to be compared to college football player George Gipp, the character he played in Knute Rockne, All American.

That explains a lot.