Fans of Lucifer took to social media by the millions to help save the show in 2018 after Fox canceled the series without warning.

Within hours after the cancellation, with a remarkable Twitter campaign underway, Lucifer producers were on the phones finalizing a deal with streaming giant Netflix, so they could conclude the series on their own terms.

Lucifer creator Neil Gaiman made clear today it was Netflix that “rescued” the series.

It was also established in 2018 that there would be only two seasons.

“It was announced by Netflix when they rescued Lucifer that it would be ending at the end of Season 5,” wrote Gaiman.

This answer comes at a time some fans are hoping that a #KeepLucifer push in 2020 will have the same success as #SaveLucifer in 2018.

But unlike two years ago, Gaiman, producers and the cast have not called on fans to pressure Netflix into more seasons.

Fox canceled the show without warning at the end of season 3, and Netflix has lived up to it’s commitment of a fourth and fifth concluding season.

Still, some Lucifans have speculated that part of the reason for the lack of pressure on Netflix is that Gaiman is already promoting his upcoming series The Sandman.

But Gaiman strongly denies that speculation.

The agreement for two seasons of Lucifer “was well over a year before Netflix won the auction for Sandman,” he responded on Twitter.

It was announced by Netflix when they rescued Lucifer that it would be ending at the end of Season 5. This was well over a year before Netflix won the auction for Sandman.

Gaiman and members of Lucifer’s cast and writing team have been pushing back against making Netflix the enemy as the series nears its end.

Executive producer Ildy Modrovich has been urging fans since last July to accept the fact that their beloved TV show is entering its final season this year.

In a Twitter post, Modrovich tried to head off efforts by fans who are lobbying for a sixth season of the show.

“We’re all beyond grateful that they gave us this new life in the first place and a chance to give us the ending it deserves.”

Lauren German, who last summer had been the only cast member to suggest another social media campaign, quickly backed off that push instead suggesting fans enjoy the ride of the final season.

But now we know definitively from Netflix that they have decided to end the show after one more, final season 5. So knowing that, it’s nice to be able to focus on making this last season our best yet. We love you all and let’s go out with a devilish bang. #devilbang

JimHeath.TV, which actively promoted the #SaveLucifer campaign in 2018, said it was difficult promoting something not backed by anyone associated with the show.

“Unlike two years ago, when cast and crew of Lucifer were working with us to save the show with #SaveLucifer or #RenewLucifer, this time around we do not want to make Netflix the enemy if that’s not how Tom and everyone else associated with the series sees it,” said Heath. “We’ll wait and see if anyone on the show changes their mind, but if that doesn’t happen, we don’t want to push for something they don’t even want.”

There are no contractual obligations with Netflix that prevent members of the cast from pushing for additional seasons.

Netflix did add six additional episodes to the final season, and is expected to drop the first eight later this spring.

[READ: Life After Lucifer – Netflix Picks Up The Sandman in HUGE Financial Deal]

For Gaiman, it’s been a long wait for his beloved Vertigo comic to finally appear on television.

More than three years after New Line’s failed attempt to turn the graphic novel into a feature film, Netflix signed what sources describe as a massive financial deal with Warner Bros. Television to adapt the best-seller into a live-action TV series.

Sources familiar with the pact note it is the most expensive TV series that DC Entertainment has ever done.

The drama has officially been picked up with an 11-episode order.

Allan Heinberg (Wonder Woman, ABC’s The Catch, Grey’s Anatomy) is set to write and serve as showrunner on the straight-to-series drama.

Gaiman, who created the ongoing monthly comic, will executive produce alongside David Goyer.

The Sandman deal will provide a financial windfall to Warners, which is in final negotiations for a new film and TV pact with J.J. Abrams that could be worth north of $500 million.

Casting should start soon with the role of Morpheus likely announced in the next few months.

Casting should be all done by winter 2019.

There will be plenty of roles to cast, too, since Sandman includes a large group on unusual characters — typical of Gaiman and his other TV franchises: Good Omens and American Gods.

Fans of Gaiman, of the dark fantasy genre, will know that The Sandman novel featured the first appearance of the Lucifer character. 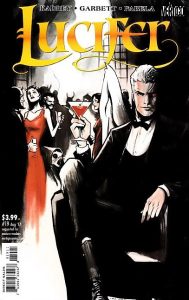 Lucifer acted as a huge side-character for The Sandman, as he fought to regain his kingdom.

After the events of The Sandman’s graphic novel, Lucifer escaped to Los Angeles to open his own piano bar – LUX. Sound familiar?

Throughout The Sandman story, Lucifer had some standout moments, and even clashed with the titular character once or twice.