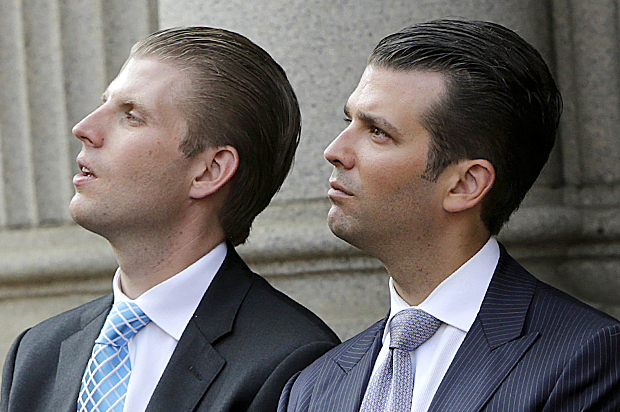 Donald Trump Jr posted a meme on his social media page which referred to Joe Biden as a ‘pedophile’ while his younger brother Eric suggested that the coronavirus pandemic was a ‘hoax’ perpetrated by Democrats to prevent his father from holding election rallies.

It’s a sign of how low the Trump family plans to go between now and the November election.

Trump’s two eldest sons sparked outrage with their comments on Saturday as the nationwide death toll from COVID-19 nears 90,000 and more than 1.5 million Americans have been confirmed to be infected.

Don Jr on Saturday posted an Instagram meme showing two photos stacked on top of one another – one showed Biden and the other showed an alligator.

The caption near Biden read ‘See you later, alligator!’ while the caption next to the alligator read ‘In a while, pedophile!’

‘The 3 emojis in the caption should indicate to anyone with a scintilla of common sense that I’m joking around,’ Don Jr wrote on his Twitter account.

He then added: ‘If the media doesn’t want people mocking and making jokes about how creepy Joe is, then maybe he should stop the unwanted touching and keep his hands to himself?’

On Sunday, 42-year-old Don Jr posted a video on Twitter showing Biden as vice president presiding over the swearing-in of members of Congress.

The 2:20-long clip shows Biden touching and kissing the young children of members of Congress. In some segments of the clip, the video is slowed down to make Biden appear somewhat predatory.

A New York Times reporter who had posted Don Jr’s Instagram meme suggesting Biden was a pedophile slammed the president’s eldest son for ‘misleading’ the public with the clip.

‘Trump’s eldest son is doing this to insinuate that [Biden] (a friend to many of the lawmakers he’s swearing in) is committing a vile crime,’ the reporter, Jonathan Martin, tweeted.

‘This is how the sitting president is running for re-election in a pandemic w 36M unemployed.’

Don Jr then posted another video showing Biden stroking young girls’ hair and affectionately touching them on the shoulders.

‘Here’s the second part of the video so that no one can say that I’m trying to change my story after the fact. I’ve been nothing but consistent…

‘Just like the New York Times is when they’re doing damage control for the DNC.’

In recent days, the Trump campaign has unleashed a torrent of ads on Facebook calling into question Biden’s cognitive fitness.

‘Joe Biden too old?’ asks one ad in which Biden is depicted in an old age home as a nursing attendant feeds him.

‘Geriatric mental health is no laughing matter,’ another ad reads.

Another ad reads: ‘Joe Biden – old and out of it.’

Anti-Biden ad from Facebook being paid for by the Trump campaign.

Don Jr’s younger brother, Eric, 36, ignited outrage when he suggested that the coronavirus was engineered by Democrats to sabotage his father’s re-election prospects.

‘They think they are taking away Donald Trump’s greatest tool, which is being able to go into an arena and fill it with 50,000 people every single time,’ Eric Trump said of Democrats during an interview which aired on Fox News on Saturday.

‘You watch, they’ll milk it every single day between now and November 3.

‘And guess what, after November 3 coronavirus will magically all of a sudden go away and disappear and everybody will be able to reopen.’

Biden’s campaign called Eric Trump’s comments that the coronavirus will “magically” disappear after the election “unbelievably reckless” on Sunday.

Kate Bedingfield, Biden’s deputy campaign manager and communications director, said in a statement that for President Trump’s son “to claim that the coronavirus is a political hoax that will ‘magically’ disappear is absolutely stunning and unbelievably reckless.”

“The simple fact is that President Trump ignored the threat of the coronavirus for months and has mishandled the response at every step since — destroying the strong economy he inherited from the Obama-Biden administrations and leading to countless unnecessary death,” she said.

“Trump’s campaign knows he can’t run on that dismal record so they’re desperate to do whatever they can to throw up a smokescreen to try to conceal his historic mismanagement of this crisis,” she continued.

In February, Donald Trump called criticism of the White House response to the coronavirus outbreak a ‘new Democrat hoax’.

At the time, there were only dozens of confirmed COVID-19 cases in the US and just a few deaths.

Since that time, however, there are more than 1.5 million confirmed cases and the national death toll is expected to exceed 100,000 in the next few weeks. 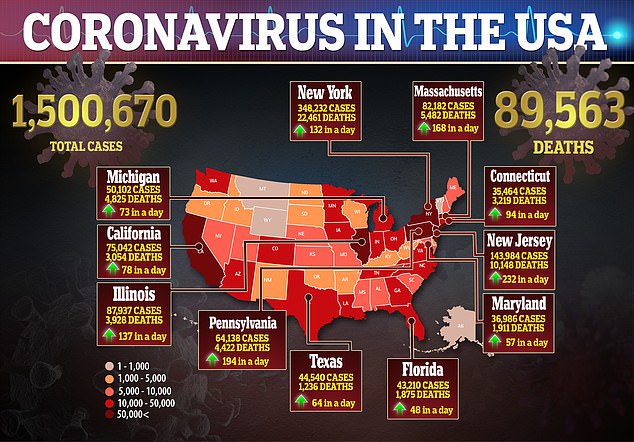 During his Fox News appearance on Saturday, Eric Trump told the host that the criticism of his father’s administration over its preparedness for the pandemic was a political tactic used by Democrats and their ‘propaganda arm’ – the news media.

‘They’re doing it for one reason: They want to hurt Trump,’ Eric Trump said.

‘Now they’re trying to do it with coronavirus.’

Public health officials have urged states to use caution when allowing businesses to reopen and warned the fall and winter may bring a larger wave of coronavirus infections.

The U.S. has counted more than 1.4 million COVID-19 infections, leading to at least 89,207 deaths, according to data from Johns Hopkins University.