The New 007 Is Black, Beautiful & A Woman – But Relax Tom Ellis Fans, He Could Still Be James Bond

Since Daniel Craig announced he was standing down as James Bond, debate has raged on who should replace him in the 25th movie.

JimHeath.TV has been advocating Tom Ellis (Lucifer himself) to take the lead role for over a year.

But in a ‘popcorn-dropping moment’, British star Lashana Lynch, has been given Bond’s license to kill in the 25th movie in the franchise, currently being shot in Italy and the UK.

Traditionalists to the Ian Fleming novels can relax: she’s not the new James Bond, but a new character who takes over his secret agent number after he leaves MI6.

That means Ellis could still make appearances, or have his own film, as James Bond in the future.

The new story line, reported by the Daily Mail, begins with Bond retired in Jamaica.

But spymaster M – played by Ralph Fiennes – calls him back in desperation to tackle a new global crisis.

There is a pivotal scene at the start of the film where M says ‘Come in 007’, and in walks Lashana who is black, beautiful and a woman.

Bond is still Bond but he’s been replaced as 007 by this stunning woman. 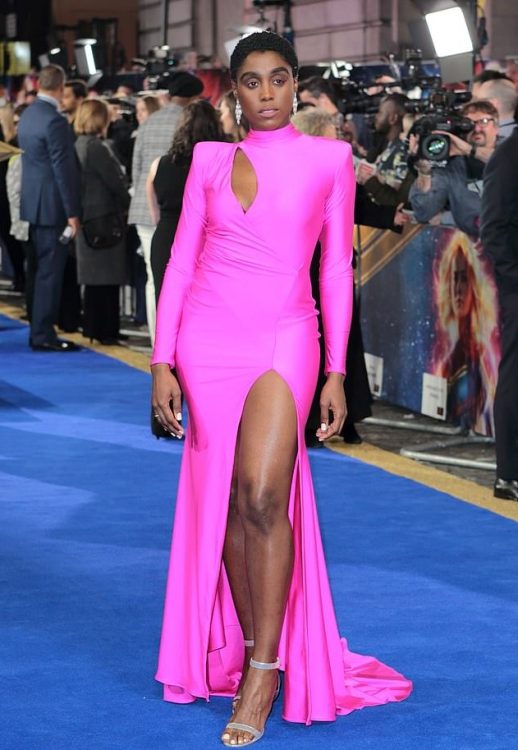 Come in 007: British star Lashana Lynch walks in when the James Bond spy number is called.

According to an insider, Bond, of course, is sexually attracted to the new female 007 and tries his usual seduction tricks, but is baffled when they don’t work on a brilliant, young black woman who basically rolls her eyes at him and has no interest in jumping into his bed.

Well, certainly not at the beginning.

The source to the Daily Mail added that the phrase ‘Bond girls’ is now forbidden, saying: ‘We were all told that from now on they are to be addressed as ‘Bond women’.’

Waller-Bridge, who wrote the BBC comedy Fleabag and the female-led thriller Killing Eve, was recruited to ensure the 57-year-old franchise moved with the times.

“There’s been a lot of talk about whether or not Bond is relevant now because of who he is and the way he treats women,” said Waller-Bridge. “I think that’s bullshit. I think he’s absolutely relevant now. The franchise has just got to grow. It has just got to evolve, and the important thing is that the film treats the women properly. He doesn’t have to. He needs to be true to his character.”

Lynch, 31, had a breakthrough role as the fighter pilot Maria Rambeau in Captain Marvel, released earlier this year.

Originally from Hammersmith, West London, she made her debut in the 2011 drama Fast Girls, has appeared in Silent Witness and Death In Paradise and was a regular cast member on the short-lived 2015 BBC show Crims. She also played Rosaline Capulet in the American period drama series Still Star-Crossed, set after the deaths of Romeo and Juliet.

The source said: ‘Lashana is absolutely brilliant and Phoebe’s script is as sharp and funny as you would expect. This Bond pays tribute to some of the earlier films with a lot of humor.’

Indeed, one photograph taken on set shows Lynch in a safari suit similar to the one Roger Moore famously wore when he played 007.

‘This is a Bond for the modern era who will appeal to a younger generation while sticking true to what we all expect in a Bond film,’ the source added. ‘There are spectacular chase sequences and fights, and Bond is still Bond but he’s having to learn to deal with the world of #MeToo.’

Could James Bond reappear in the 26th movie of the franchise?

Ellis, a British actor has played the devil in the show Lucifer with charm and anger and wit for five seasons, is still perfect for the role.

Let’s hope Ian Fleming’s original James Bond character will come back in style soon, because Ellis was born for the role.